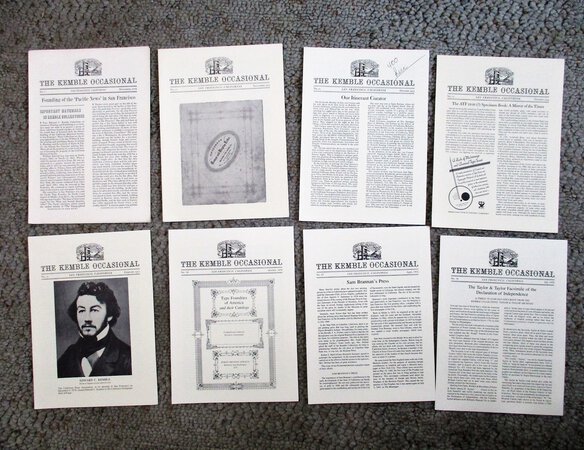 NINETEEN ISSUES of THE KEMBLE OCCASIONAL 1964-1989. "Issued now and then from The Edward C. Kemble Collections on AMERICAN PRINTING & PUBLISHING".

All the issues are in VERY GOOD condition, one issue has "400 here" written at the top of the first page, one issue has a vertical fold, overall they are just lightly used, still bright, clean and clear.

Articles include: Sam Brannan's Press, Type Foundries of America and their Catalogs; The Taylor & Taylor Facsimile of the Declaration of Independence; "At the Sign of the Lark" the San Francisco Publishing Venture of William Doxey; Booksellers & Bookselling in The Kemble Collection; and MANY more.

A nice gathering of these scarce publications on Printing and Publishing based on The Edward C. Kemble Collection.