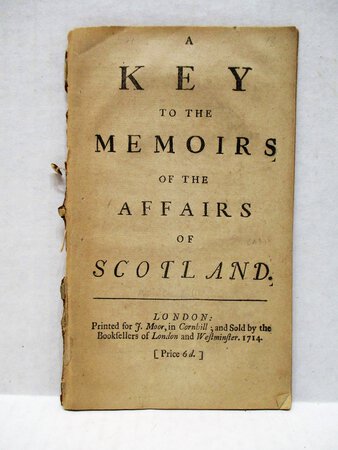 A KEY TO THE MEMOIRS OF THE AFFAIRS OF SCOTLAND.

LONDON: Printed for J. MOOR in Cornhill; and Sold by the Booksellers of London and Westminster. 1714. First edition, first state, without the added 3 page Key to the Appendix that was in later states.

Both this First State and the Second State with Appendix are held in the Oxford Bodleian Library, which is searchable online.

Note that the first state has the sig. A under the 'a' in 'Hamilton', and there is NO list of errata at the foot of page 19.

FAIR condition. Apparently bound with other booklets at some point as there are remnants of a leather spine still attached to the spine. Pages are toned with age and there is some scattered light foxing. Still a complete, original, fully legible booklet, with its original price of 6 d.