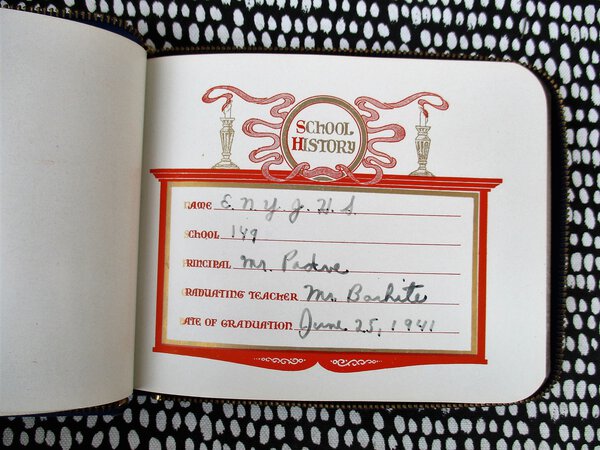 1941 Autograph Book kept by Murray, a student graduating from East New York Junior High School, Public School 149, later to be known as PS 149 "Danny Kaye". Like many schools in Brooklyn, the demographics of the school have changed dramatically since 1941.

The autograph book is held in a zippered blue vinyl case which is embossed on the front cover with: "Autographs / E. N. Y. J. H. S. / 149". It measures 4..5x5.5 inches. There are approximately 60 pages where signatures and memories are written.

Though the autographs in the book are all dated 1941, the autograph book itself was likely published in 1939 because the first 7 pages are photographs of the 1939 NEW YORK WORLD'S FAIR. These are followed by a photograph of the school building and the school's principal. Then comes the autograph section.

Some of the kids who signed and left comments in the book include: Harriet Rothberg, Lorraine Olanoff, Seymour Boom, Sol Wishnick, Meyer Meltzer, Seymour Weintraub, David Simon, Frieda Scharfstein, and many others.

The owner of the autograph book was named Murray, though some referred to him as "Moish or Moe".

The autograph book is in VERY GOOD condition, all the pages are tight, bright, clean and clear. The zippered case is sturdy and functions well, but the gilt embossing on the front cover has substantially faded.