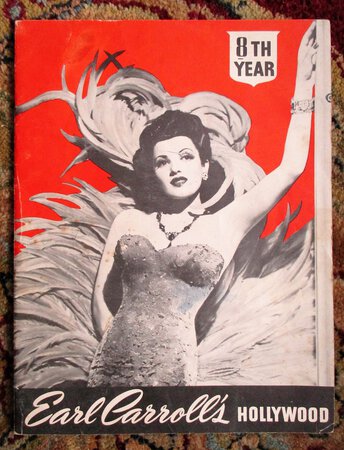 EARL CARROLL'S HOLLYWOOD. Program for the SHOWGIRLS stage show that was proclaimed to feature "The Most Beautiful Girls In The World".

GOOD condition, there is a thin 1 inch ink line on the face of the pin-up girl on the front cover, a light smudge to the top margin of the front cover, and some creasing to the rear cover; overall just lightly used and still solid, bright and clean.

Here's an interesting tidbit from Wikipedia: "On June 17, 1948, while en route from Los Angeles to New York City, Beryl Wallace and Earl Carroll died in the crash of United Airlines Flight 624 in Aristes, Pennsylvania. They were interred together in the Garden of Memory at Forest Lawn Memorial Park Cemetery, Glendale, California."