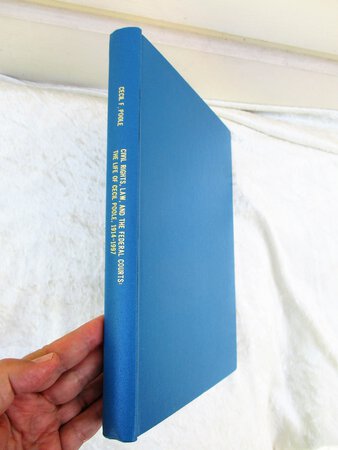 An ORAL HISTORY transcribed from INTERVIEWS with Cecil Poole conducted by Carole Hicke in 1993.

First Edition. This is copy number #22 as stated on the copyright page.

Hardcovers, blue cloth covered boards, gilt titling on the spine, 8.5x11 inches. Pagination [16], vii, 248 pages. Laid in is an information and order sheet printed on UC Berkeley letterhead dated January 1998. At that time copies could be ordered for $65 plus $4 shipping.

True FIRST EDITION of this important work, published by the University of California, Berkeley in 1998.

About CECIL F. POOLE (from Wikipedia):

INTERNATIONAL BUYERS PLEASE NOTE: This book is heavy and will require additional shipping charges. After placing your order you will be notified of the additional charges and be able to accept or reject them before your payment is processed. Or you can contact us ahead of time to find out the shipping charge to your country. Thanks.