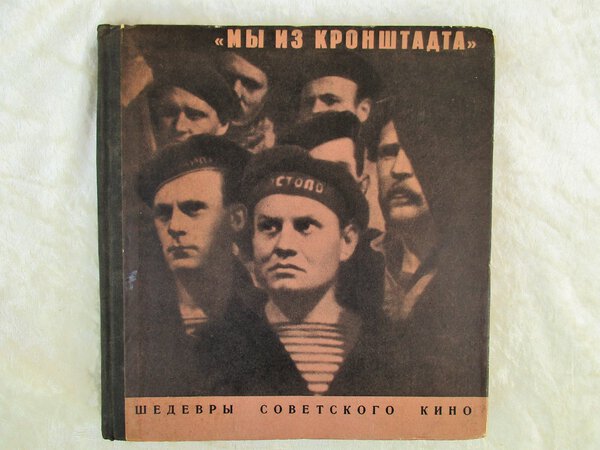 THE SAILORS OF KRONSTADT.

A SHOT by SHOT, SCENE by SCENE, FILM BOOK of the 1936 RUSSIAN FILM released with the English title: The Sailors of Kronstadt. Directed by Efim Dzigan it is considered one of the masterpieces of Soviet cinema.

Fully illustrated with hundreds of shots from the film, in the order of which they appear on the screen.

GOOD condition: the covers are worn along their edges, worn through at the corners, bent at the corner tips, but remain solid and the image on the front cover is clear and bright; internally, the pages are just lightly used and still tight, bright, clean and unmarked. A solid, presentable copy, with covers showing some wear.

About the Russian Film WE ARE FROM KRONSTADT (excerpt from Wikipedia and IMDb):

******In 1919, during the post revolution Russian Civil War, a naval detachment (made up of communist Reds) defends the strategic city of Petrograd from the White Russian counterrevolutionary forces. Director Yefim Dzigan had himself fought for the Bolsheviks in the fleet, so the Red sailors are the heroes of the film. The young Soviet State was besieged by enemies on all sides, and the Revolution was fighting for its life. While clearly propagandistic, the film is often quite poetic visually, not naturalistic as was prescribed by authorities at the time. The film was honored at the 1937 Paris World's Fair.

Writing for The Spectator in 1937, Graham Greene gave the film a good review, characterizing it as being "in the tradition of boys' stories, full of last charges and fights to the death, heroic sacrifices and narrow escapes, all superbly directed", and summarizing it as an "unusual mixture of poetry and heroics". Identifying moments of humour and pathos, Greene claimed that a Fordian poetic sense (i.e. not melodic arrangement, but moral composition) had thoroughly impregnated the film from the first shot to the last, and that the writing resonated with Chekhov's definition of the novelist's purpose, "life as it is: life as it ought to be".******