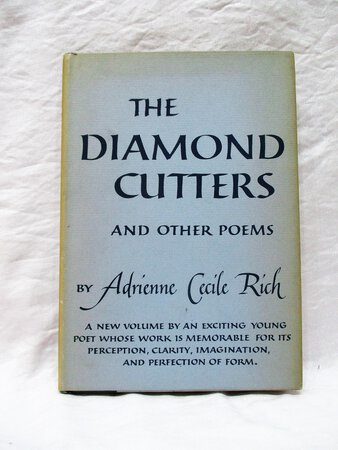 THE DIAMOND CUTTERS AND OTHER POEMS, by ADRIENNE CECILE RICH.

SIGNED by ADRIENNE RICH on a lovely yellow bookplate on the front free endpaper. Hand signed with no inscription.

Condition: VERY GOOD book, just lightly used, still tight, bright, clean and unmarked; in a GOOD dustjacket that is sunned at the spine and folds, and slightly at the margins but is otherwise solid and clear, and retains its $2.75 price at the top of the front fold.

Rare early book of poetry by the poet Adrienne Rich, made special with her AUTOGRAPH.

About ADRIENNE RICH (from Wikipedia):

******Adrienne Cecile Rich, b.1929 d.2012, was an American poet, essayist and feminist. She was called "one of the most widely read and influential poets of the second half of the 20th century", and was credited with bringing "the oppression of women and lesbians to the forefront of poetic discourse." Rich criticized rigid forms of feminist identities, and valorized what she coined the "lesbian continuum," which is a female continuum of solidarity and creativity that impacts and fills women's lives.

In 1997, Rich declined the National Medal of Arts as a protest against Congress's vote to end the National Endowment for the Arts, and against the policies of the Clinton Administration regarding the arts, stating: "I could not accept such an award from President Clinton or this White House because the very meaning of art, as I understand it, is incompatible with the cynical politics of this administration ... Art means nothing if it simply decorates the dinner table of the power which holds it hostage."******