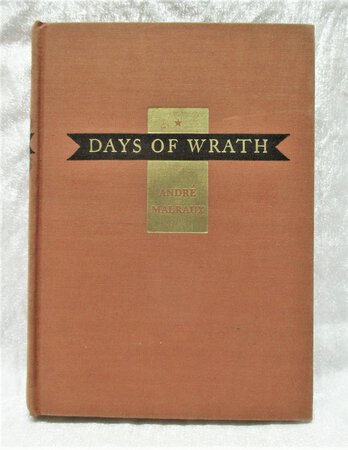 DAYS OF WRATH, by ANDRÉ MALRAUX. Translated by Haakon Chevalier.

**HAND SIGNED** by ANDRÉ MALRAUX on the half title page.

ASSOCIATION to, and from the library of, the noted historian ARNOLD KRAMMER, with his bookplate on the front pastedown.

Published by Random House, New York, 1936. First American Edition, First Printing, with the statement FIRST PRINTING on the copyright page and the date MCMXXXVI (1936) on the title page.

First published in France as Le Temps du Mépris in 1935, it is one of the first novels set in a Nazi concentration camp, and as such informed the world of the Nazi attrocities. This novel followed Malraux's award winning "Man's Fate".

André Malraux (1901-1976) was a novelist and France's first Minister of Cultural Affairs during Charles de Gaulle's presidency. You can read all about the important French writer Andre Malraux on his Wikipedia page and elsewhere on the Internet.

About the historian ARNOLD KRAMMER (from Wikipedia):

******Arnold Paul Krammer, b.1941 d.2018, was an American historian who specialized in German and United States history and a professor at Texas A&M University.

Krammer is the sole author of seven books, the most recent of which is War Crimes, Genocide, and the Law: A Historical Perspective, published in 2009, and the co-author of five books.******