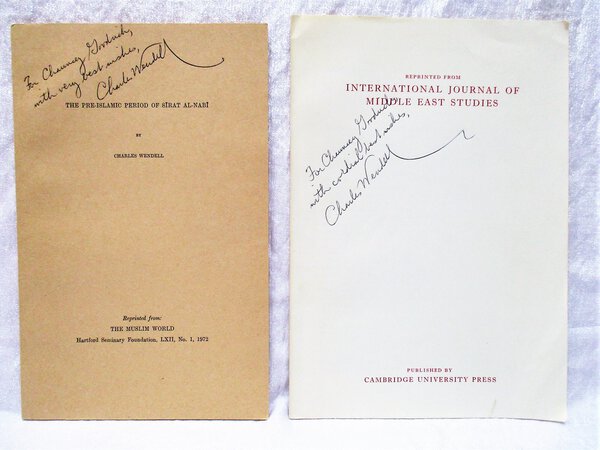 (1) BAGHDAD: IMAGO MUNDI, AND OTHER FOUNDATION LORE, by Charles Wendell. Published by Cambridge University Press, [1971]. A separately bound reprint from International Journal of Middle East Studies, 1971. SIGNED & INSCRIBED by the AUTHOR on the front cover. Booklet, paper covers, 7x10 inches, 30 pages (numbered 99-128). GOOD condition, some creases and edge wear to the covers, a crease to the upper corner of the inner pages, and some minor hand corrections to the text, presumably by the author; overall a solid, bright, presentable copy.

About CHARLES WENDELL (from a UC Santa Barbara website):

Charles Wendell was a brilliant linguist, fluent in French, German, Italian, Spanish, Arabic, Persian, Hebrew, Turkish, Latin, and Greek. In 1967 Wendell joined the faculty at Santa Barbara as an Assistant Professor of Arabic. He was later advanced to Associate Professor with a joint appointment with the Eastern Languages Department, where he continued to teach Arabic, and with the Religious Studies Department, where he offered courses in Islamic religion.

A meticulous scholar, Wendell, whose articles were erudite and enlightening, contributed to several important books on Middle Eastern culture and civilization. But his interests were quite broad, ranging from the history of early Islam to intellectual developments in modern Egypt. Early in his scholarly career Wendell's translation of Muhammad Abduh by Osman Amin was published by the American Council of Learned Societies. Later books included The Evolution of the Egyptian National Image: from its Origins to Ahmad Lutfi al-Sayyid and Five Tracts of Hasán al-Banná (both by UC Press). At his death Professor Wendell was engaged in a long range, two volume project on the 8th century Arabic classic The Book of Kalilah and Dimnah. Planned and begun were a new translation of the work and a full volume to "deal as exhaustively as possible with the biography of the author and his historical and cultural ambience." Such thoroughness was typical of Wendell's scholarship.******