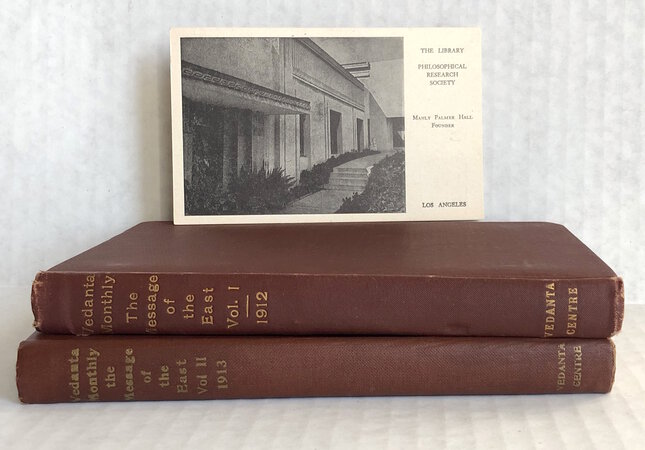 VEDANTA MONTHLY: The Message Of The East. 1912 & 1913. With contributions from Sister Devamata, Swami Vivekananda, Swami Paramananda, Swami Ramakrishnananda and others.

Published by The Vedanta Centre, Boston, Massachusetts. Edited by Swami Paramananda. 1912 & 1913 First editions both with 12 monthly issues, January thru December, two full years. 1912 Volume I, Number's 1-12. 1913 Volume II, Number's 1-12. Hardbound in original publisher's brick-red cloth with gilt printing on the spine, 7.5" x 5", paginated separately 196, 196, original paper wrapper from January 1912 bound into volume I, and each with Index. GOOD CONDITION: wear to the edges, corners and covers, internally signs of age and use, volume I with darker page edges, penned former ownership on ffep, some penciled notations/marginalia, and November is bound in out of order (this affected the run of 1912), both volumes complete as issued, overall respectable copies of these elusive first editions. Scarce, no copies held in OCLC collections worldwide.

THE VEDANTA Centre of Boston was founded in 1909 by Swami Vivekananda's youngest disciple, Swami Paramananda (1884-1940), who was a Ramakrishna monk, cutting edge Hindu Mystic, Poet, Guru and Spiritual Innovator. In 1912 he founded the "Message of the East" the first Vedanta periodical published in the United States. He established a monastic community for American women and his first disciple was Sister Devamata (Laura Glenn (1867-1942)). She became his assistant in 1910, and is known for her literary works, her editing of both Swami Vivekananda's and Swami Paramananda's lectures, and as Chief Editor of the Message of the East. In 1915, Swami Paramananda opened a Vedanta Centre in Los Angeles, dividing his time between Boston and L.A.