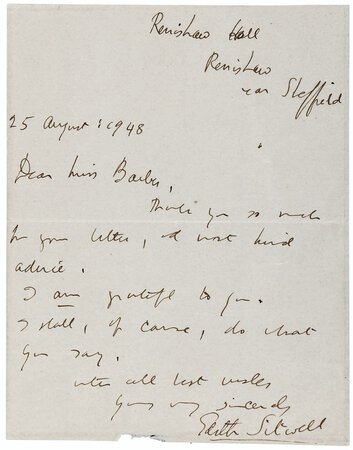 HANDWRITTEN, SIGNED LETTER from EDITH SITWELL to "MISS BARBER" (Elizabeth Barber of The Society of Authors, a U.K. Union of Authors).

Handwritten on a 6.25x8 inch sheet of laid paper. Written on one side only. Signed.

The return address is: Renishaw Hall / Renishaw / Sheffield. The letter is dated 25 August 1948. No envelope.

The letter reads: "Dear Miss Barber, / Thank you so much for your letter, and most kind advice. I am grateful to you. I shall, of course, do what you say. / With all best wishes / Yours very sincerely / Edith Sitwell".

This handwritten letter is in GOOD condition, some minor chipping to the bottom edge, a horizontal fold across the middle where it was folded in half at one point, and light signs of handling; the writing is bright, clear and fully legible. A solid, nice letter.

About THE SOCIETY OF AUTHORS (where Elizabeth Barber worked from 1936 to 1971, first as an Assistant to the General Secretary then as General Secretary. She retired in 1971 and died in 1979):

******The Society of Authors (SoA) is a United Kingdom trade union for professional writers, illustrators and literary translators, founded in 1884 to protect the rights and further the interests of authors. As of September 2019, it represents 11,000 members and associates.

The SoA vets members' contracts and advises on professional issues, as well as providing training, representing authors in collective negotiations with publishers to improve contract terms, lobbying on issues that affect authors such as copyright, UK arts funding and Public Lending Right.