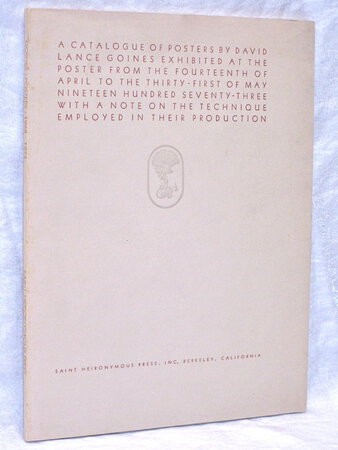 A Catalogue Of Posters By David Lance Goines Exhibited At The Poster From The Fourteenth Of April To The Thirty-First Of May Nineteen Hundred Seventy-Three With A Note On The Technique Employed In Their Production.

Published by Saint Heironymous Press, Berkeley, California, 1973. Limited First Edition, printed in an edition of 2000 copies (so stated). A finely printed catalogue by David Lance Goines, with 27 small lithographic plates reproducing his earliest 27 posters, and in many cases using the same inks and paper stock as the original posters. Softcover wraps with french folds, 9" x 7", unpaginated [33 pages], each poster is printed on its own leaf. NEAR FINE Condition: a touch of light wear/age, overall tight, bright, clean and unmarked. An excellent copy. This original 1973 exhibition catalogue is an important and scarce resource for the collector.