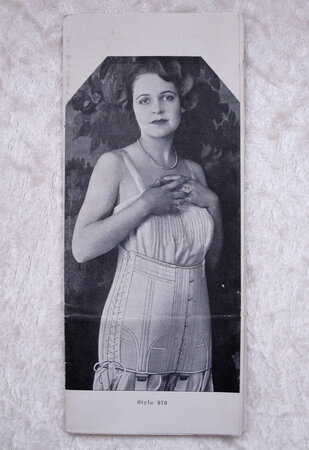 Original Vintage Ferris Brothers Company Trade Catalogue Brochure circa 1910. Illustrated fold-open catalogue, 7.25" x 3" folded, opens to 24" with printing on both sides. Twenty styles of corsets and accessories are described and illustrated with a black & white photograph or drawing. VERY GOOD Condition: light wear from age and use, a stiff horizontal crease (probably from mailing), and some penciled manufacturers notations indicating discontinued items and prices, otherwise this rare brochure is solid and bright.

In 1878, Sherwood Bissell Ferris and his brother Murray W. Ferris started Ferris Brothers in New Jersey, manufacturers of corsets, corset waists, and other waists during the late 19th and early 20th centuries. Ferris Brothers is important historically because they led a health movement against old fashioned tight-lacing rigid bone corsets and waists. Their corsets were considered healthier and more natural for women and girls because they didn't harmfully cinch the waistline too tightly, were more comfortable, and allowed freedom of movement for sports, and maternity.