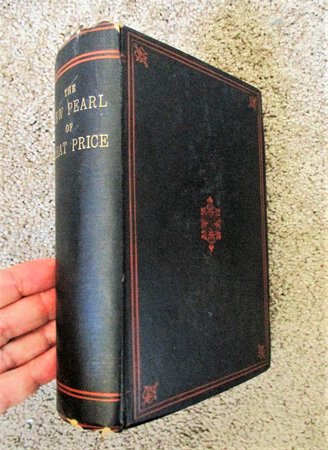 THE NEW PEARL OF GREAT PRICE: A Treatise Concerning the Treasure and Most Precious Stone of the Philosophers. Or the Method and Procedure of this Divine Art; With Observations Drawn From the Works of Arnoldus, Raymondus, Rhasis, Albertus, and Michael Scotus. First Published by Janus Lacinus, the Calabrian, with a Copious Index. By [Petrus Bonus of Ferrar]. Translated into English by the noted occultist Alfred Edward Waite.

Hardcovers, original brown cloth covered boards with red framing and corner designs on the front and rear boards, a red center design on the front board, and gilt titles and red lining to the spine; 7.5x5 inches (12.5x19cm). Pagination: xi, [1], 441, [1] pages + [2] pages of ads at the rear.

First printing in the English language of this alchemical classic, translated from the Aldine Press Latin edition.

GOOD condition. The cover's cloth covering has some small tears and chips to the spine ends, and there is a bit of wear to the corner tips, otherwise the covers are sturdy, bright and doing their job well. Internally, the inner hinge is split at several places where the book was over-opened, but holding well with the sewn binding; otherwise the pages are just lightly used and still bright, clean and unmarked. A solid, nice, presentable copy.

About PETRUS BONUS (from Wikipedia):

******Petrus Bonus was a late medieval alchemist. He is best known for his Precious Pearl (Latin: Margarita Preciosa) or Precious New Pearl (Margarita Preciosa Novella), an influential alchemical text composed sometime between 1330 and 1339. He was said to have been a physician at Ferrara in Italy, causing him to sometimes be known as Petrus Bonus of Ferrara or as Petrus Bonus the Lombard (Petrus Bonus Lombardus). An Introduction to the Divine Art (Introductio in Divinam Chemicae Artem) is also attributed to him. In contrast to other alchemical texts of the same period, Petrus Bonus's alchemy describes an art that is in part natural and in part divine or supernatural.******

About ARTHUR EDWARD WAITE, the Translator and Preface Author:

******Arthur Edward Waite, b.1857 d.1942. Author, mystic, magician, alchemist, and occultist, Arthur Edward Waite is probably best remembered as the co-creator of the popular Rider-Waite TAROT card deck. He was a member of the Hermetic Order of the Golden Dawn and was active in both Rosicrucianism and Freemasonry.

Waite joined the Runnymede Lodge of Freemasonry on September 19, 1901, becoming exalted to the degree of Holy Royal Arch on May 1, 1902. That same year he joined the Societas Rosicruciana in Anglia. Joining the Masons and the Rosicrucians was a canny move, as many of his new fraternal brothers had been former critics of his books and positions, and despite the internal haggling and splinter groups within Golden Dawn, Waite assumed the mantle of Grand Master in 1903. Waite's first act as Grand Master was to change the group's name to the Order of the Independent and Rectified Rite.

Waite had been attracted to Theosophical philosophy early on but mistrusted the movement's founder, Madame Helena P. Blavatsky.

Waite is best remembered for the publication of the Rider-Waite deck of the Tarot. It was the first deck to have illustrations for all 78 cards, including the Minor Arcana and the Major Arcana, and for using the drawings to suggest the Divination meanings of the cards. Occultists embraced the deck when it appeared in 1910, and it remains a favorite Tarot deck today. Waite also popularized the 10 card Tarot divination spread entitled Celtic Cross.

Waite died on May 19, 1942. He is buried in the churchyard at Bishopsbourne, where his grave is covered in a tangled growth of the deadly nightshade plant.******