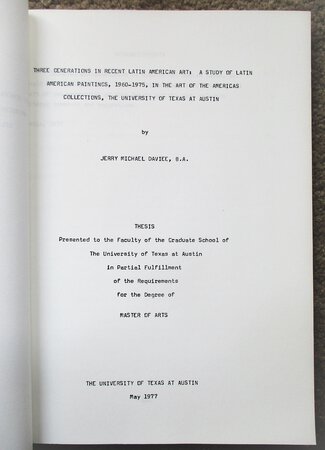 THREE GENERATIONS IN RECENT LATIN AMERICAN ART: A Study of Latin American Paintings, 1960-1975, in the Art of the Americas Collections, The University of Texas at Austin, by Jerry Michael Daviee. An Original M.A. Thesis.

Thesis submitted to the faculty of the Graduate School of the University of Texas at Austin in partial fulfillment of the requirements for the degree of Master of Arts.

NEAR FINE condition, the covers are sharp and bright, inner pages are lightly toned at the margins, overall tight, bright, clean, clear and unmarked. A solid, very presentable copy.

About JERRY MICHAEL DAVIEE (excerpted from his online obituary):

******Jerry Daviee, b.1947 d.2017, began his art studies at the San Francisco Art institute in San Francisco in 1965 and went on to receive an MA in Art History with a focus on contemporary Latin American Art at the University of Texas at Austin.

In 1977 Jerry became Curator of Art at the Amarillo Art Center in Amarillo, Texas. In 1980 Jerry and his wife moved to San Francisco where he assumed the position of Curator of Art for the American Museum Association. He continued his studies, receiving an M.F.A. from the San Francisco Art Institute in 1989. From 1990 to 2007, Jerry Served as the Grants Officer for the Oakland Museum of California.******