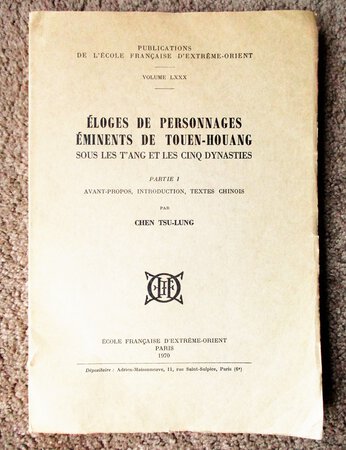 (PRAISE of EMINENT CHARACTERS of TOUEN-HOUANG under the T'ANG and the FIVE DYNASTIES. Part I: Foreword, Introduction, CHINESE TEXTS. Edited by Chen Tsu-Lung.)

INSCRIBED ASSOCIATION COPY. Inscribed on the half title page by Chen Tsu-Lung to Noted Chinese Studies scholar L. S. GOODRICH. The inscription is in Chinese and, according to a Chinese speaking friend, says: "Professor, Please Comment." Also, laid-in on the title page is a business card of Chen Tsu-Lung on which he inscribed the following in English: "Please oblige me by making a review of it."

Wrappers, 7.5x11 inches (19x28cm). XVII pages of introductory text in French followed by 197 pages of CHINESE TEXTS. There are 20 photographic plates of original Chinese manuscripts at the rear.

GOOD condition: The spine covering has creases, scrapes and closed tears, the top of the spine is bumped, the front and rear covers have creasing to the corners and light wear to the edges; internally very nice, some light corner creases, overall the pages are tight, bright, clean and unmarked. Many of the pages remain uncut.

About L.S. GOODRICH, to whom the book is inscribed (from Wikipedia):

******Luther Carrington Goodrich, b.1894 d.1986, was an American sinologist and historian of China. A prolific author, he is perhaps best remembered for his work on the Dictionary of Ming Biography, 1368-1644.

Luther Carrington Goodrich was born on September 21, 1894, in Tongzhou, a southeastern suburb of Beijing, where his parents were serving as Protestant missionaries. He received his master's degree in 1927 and Ph.D. in 1934, both from Columbia University. He continued at Columbia as a faculty member, becoming a full Professor in 1945. Excluding a few short breaks spent as a visiting professor in institutions abroad, he spent the rest of his career at Columbia University.******