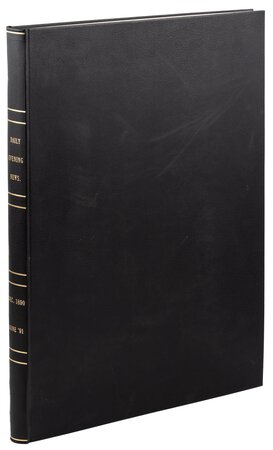 The Sacramento Daily Evening News was published from 1890 to 1893, after which the punisher, Wells Drury, went on to act as editor for various San Francisco newspapers. The issues were published daily, Monday through Saturday.

Thousands of interesting articles and tidbits about life in Sacramento and California in 1890 and 1891. Not unexpectedly, there are also some items disparaging (both intentionally and non intentionally) of Chinese, Native Americans, Italians, Blacks and, of course, Women.

Condition: The issues have been professionally bound in hardcovers, the endpapers are new, the binding is sturdy. The pages have also been professionally repaired here and there throughout, with some encapsulated edges, some clear tape, etc. The pages are rather fragile and there are some tears, missing corners, chips, etc. The edgewear is minor on most pages, significant on a few. I noticed that several articles were cut out of a couple pages. There appears to be several issues missing. The pages are age toned, as normal. Overall this carefully and professionally bound and repaired collection of issues remains well preserved, tight, bright, clean and unmarked.

About Wells Drury, the Publisher of the Daily Evening News (from various Internet sources):

******Wells Drury, pioneer newspaperman, was born September 16, 1851 in New Boston, Illinois. Orphaned while crossing the Oregon Trail in 1852, he was adopted and brought up in Oregon on a Indian reservation on Puget Sound. Drury arrived in San Francisco in 1873. Successful investments in mining concerns in the Comstock in Nevada convinced him to move to Virginia City, where he became one of the editors of the Virginia City Chronicle, the Territorial Enterprise, the Gold Hill News, and the Bodie Daily Miner. As a reporter in the Comstock, Drury knew Mark Twain and Bret Harte and later, in San Francisco, met Robert Louis Stevenson. In 1882 Drury became deputy secretary of the state of Nevada and in 1887 became a member and speaker pro tem of the Nevada House of Representatives.

INTERNATIONAL BUYERS PLEASE NOTE: This item is very large and very heavy and will require substantial additional shipping charges. After placing your order you will be notified of the additional charges and be able to accept or reject them before your payment is processed. Or you can contact us ahead of time to find out the shipping charge to your country. Thanks.