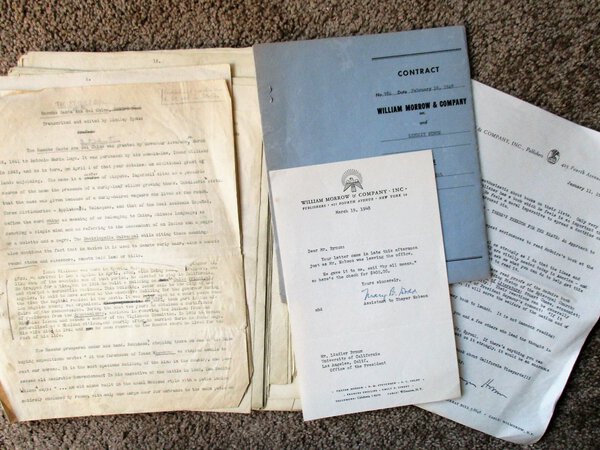 Hand corrected carbon typescript draft of THE RECORD BOOK OF RANCHO SANTA ANA DEL CHINO, transcribed and edited by LINDLEY BYNUM. The typescript is hand edited and corrected throughout. This draft is from sometime prior to 1935. It was published in 1935 in a very small run.

The Record Book contains entries of many people who had dealings with, lived in, or passed through.the Rancho Santa Ana Del Chino. It is rich with history and genealogy.

Condition: The pages are toned with age, have folds, edge creases, and general signs of handling, overall complete with typing and writing that is clear throughout.

INCLUDED with this draft is an unrelated CONTRACT for a BOOK titled EL CAMINO REAL written by LINDLEY BYNUM. The contract is between WILLIAM MORROW & COMPANY, New York, and Lindley Bynum. It is dated February 16, 1948. It is 6 pages long stapled into a blue William Morrow & Company "Contract" folder. The contract is SIGNED by THAYER HOBSON. Thayer Hobson, b.1897 d.1967, was president and chairman of the board of William Morrow & Company.

LAID IN the contract are two typed SIGNED LETTERS. One is signed by the Assistant to Thayer Hobson and reads: "Your letter came in late this afternoon just as Mr. Hobson was leaving the office. He gave it to me, said "by all means," so here's the check for $400." The second letter is signed by Thayer Hobson. It requests that Lindley Bynum write a review of a book that William Morrow is planning to publish.

The contract is in very good condition, folds and some creases to the bottom margin, overall solid and bright. The letter asking for a review has creases and some soiling, the other letter does not.

An interesting and UNIQUE group of items from the noted California historian (and Sonoma Valley winemaker), Lindley Bynum.

It was granted to Antonio Maria Lugo in 1841 by Mexican Alta California Governor Juan Bautista Alvarado. The name literally means "Santa Ana of the Fair Hair," though there have been statements that the ranch was named for a mission mayordomo, or foreman, who had curly hair, "chino" being also a Spanish word for "curly".