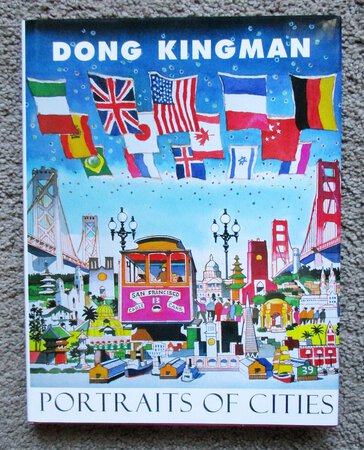 Condition: NEAR FINE book, a touch of wear to the cover's spine ends and corner tips,overall sharp, tight, bright, clean and unmarked; in a NEAR FINE dustjacket that retains its original $39.95 price at the top of the front flap. A lovely copy.

From the front flap: "This book contains 100 color reproductions, 50 b&w drawings, and text...There is also the story about how Dong Kingman taught himself to paint, creating many magazine covers, posters, and art work for major motion pictures like The World Of Susie Wong, Flower Drum Song, 55 Days In Peking, The Lost Horizon, etc."

From Wikipedia: "Dong Kingman, b.1911 d.2000, was a Chinese American artist and one of America's leading watercolor masters. As a painter on the forefront of the California Style School of painting, he was known for his urban and landscape paintings, as well as his graphic design work in the Hollywood film industry. He won widespread critical acclaim and his works are included in many public and private collections worldwide, including the Metropolitan Museum of Art, the Museum of Fine Arts Boston; the Brooklyn Museum; the deYoung Museum, and the Chicago Art Institute."