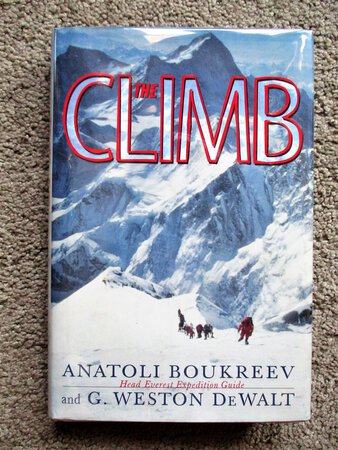 SIGNED, INSCRIBED, and DATED by ANATOLI BOUKREEV and G. Weston DeWalt. Both signatures and inscriptions are on the title page.

Anatioli Boukreev inscribed the book as follows: "For Steve / Enjoy the life. / NAMASTE from the Himalaya! / Anatoli Boukreev / 11.13.97". DeWalt wrote: "For Steve / G. Weston Dewalt / 11.13.97". The previous owner to whom the book is inscribed, Steve Mueller, has signed his name at the bottom of the front free endpaper and wrote "Return to Steve Mueller" at the bottom of the last page.

A MONTH AFTER ANATOLI BOUKREEV INSCRIBED THIS BOOK HE WAS KILLED IN AN AVALANCHE WHILE MOUNTAIN CLIMBING IN NEPAL. His death occurred on Christmas Day, 1997.

THE CLIMB is the story of the worst disaster in the history of Mount Everest and Anatoli Boukreev's first person account of what really happened. Boukreev was the head climbing guide for this West Seattle based Mountain Madness expedition. The book disputes the account given by Jon Krakauer in his book Into Thin Air.

About ANATOLI BOUKREEV (from Wikipedia):

Boukreev had a reputation as an elite mountaineer in international climbing circles for summiting K2 in 1993 and Mount Everest via the North Ridge route in 1995, and for his solo speed ascents of some of the world's highest mountains. HE BECAME EVEN MORE WIDELY KNOWN FOR SAVING THE LIVES OF CLIMBERS DURING THE 1996 MOUNT EVEREST DISASTER (as described in his book THE CLIMB, St. Martin's Press, 1997).

In 1997, Boukreev was killed in an avalanche during a winter ascent of Annapurna in Nepal. He was 39 years old.******