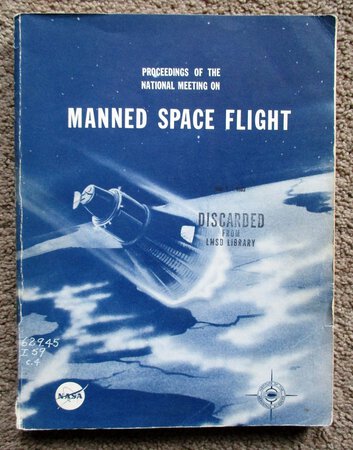 PROCEEDINGS of the NATIONAL MEETING on MANNED SPACE FLIGHT (Unclassified Portion). Published by the Institute of the Aerospace Sciences, New York,1962.

Of special note is the PILOT'S FLIGHT REPORT, by JOHN H. GLENN, JR. It is his report on the famous February 20, 1962 Mercury Flight that circled the earth. The report is 14 pages long, consisting of 8 pages of double column text and 6 pages of b&w photographs. The report is on pages 296-309

FAIR condition: Ex the LOCKHEED MISSILE & SPACE COMPANY (LMSC), Palo Alto, California, with the Company's ink stamp on the inside front cover and title page, an ink stamp on the front cover that says: "Discarded from LMSD Library" (Lockheed Missile & Space Division Library), a checkout label, shelving numbers and some other library marks here and there. Ex-lib aside, the covers have 1 inch of splitting at the bottom of the spine, creased corners, and some edge wear; internally there is a light crease to the upper corner of the pages, otherwise they are tight, bright, clean, clear and unmarked. A complete, solid, used copy with a cool ex-library provenance.

Note that among the four people whose names are handwritten on the checkout label is Gevarter, likely William B. Geverter, NASA engineer and author of several books on Artificial Intelligence, who checked out the book in 1964. The other three last names are Plaskett, Douman, and (N?) D. Alexander. Might be interesting to research those individuals.