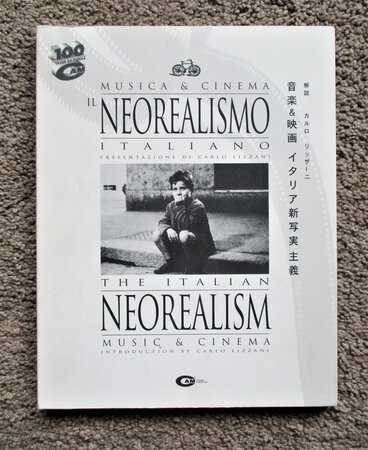 BOOK on ITALIAN NEOREALISM CINEMA & MUSIC with TWO CDs in holders on the inside rear cover. Introduction by Carlo Luzzani.

Condition: VERY GOOD book, a crease to the rear cover, some light edge wear, otherwise bright, clean, clear and unmarked. The CDs are in GOOD working condition, they have some superficial scratches, but I have played both all the way through and they played fine.

"Carlo Lizzani, b.1922 d.2013, was an Italian film director and screenwriter. Lizzani worked on such films of as Roberto Rossellini's Germany Year Zero, Alberto Lattuada's The Mill on the Po (both 1948) and Giuseppe De Santis' Bitter Rice (1949) for which he received an Academy Award nomination for Best Original Story." - Wikipedia