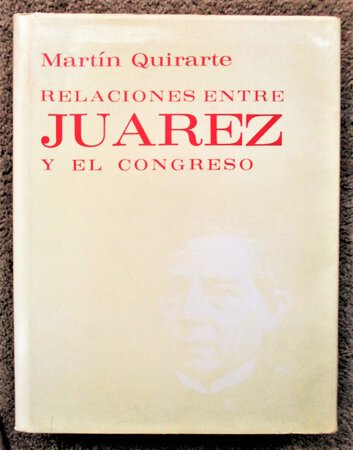 Limited edition, 1 of only 2,000 copies, as stated on the Colophon page (the last page).

Condition: GOOD book, the front and rear inner hinges are split but holding well, there is a crease to the bottom corner of the inner pages, otherwise the book is just lightly used and still tight, bright, clean, clear and unmarked; in a GOOD dustjacket that has some soiling, a couple closed edge tears, shelf rubbing and signs of handling, but is still bright and doing its job well.

True FIRST EDITION of this important work on JUAREZ and MEXICO'S CONGRESS / GOVERNMENT.

About BENITO JUAREZ (from Wikipedia):

******Benito Pablo Juárez García, b.1806 d.1872, was a Mexican lawyer and politician, who served as the 26th president of Mexico from 1858 until his death in 1872. He was the first president of Mexico who was of indigenous origin. Juarez fought against foreign occupation under the emperor Maximilian and sought constitutional reforms to create a democratic federal republic. He is a Mexican national hero and many landmarks bear his name.******

About the author MARTIN QUIRARTE (from Wikipedia):

******Martin Quirarte was a Mexican historian, and Professor of Philosophy and Letters at UNAM / National Autonomous University of Mexico, Mexico City.******