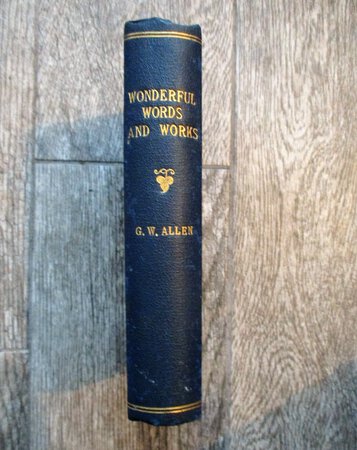 WONDERFUL WORDS AND WORKS : SERMONS on the PARABLES and MIRACLES of JESUS. By the REVEREND G. W. ALLEN (GEORGE WILLIAM ALLEN). A book about preaching from one's own spiritual insights rather than from teachings learned in a seminary or from other preachers.

From the Preface: "To hear a great subject treated by a mind that is essentially little is distressing; and especially so if the mind does not know its own littleness...Perfunctoriness is another vice of the made, not born preacher; he utters what he has been taught, not what he really feels. Of such sermons one feels that all that the preacher knows of Theology he knows from hearsay. He has been carefully trained in the views of some particular school...And men who know life, and that it is ever new, new in its interests, its outlook, its lessons, get wearied; and either endure it for the sake of propriety, or stay away from the Church altogether...Sermons should touch life, and human interests, and the human heart, at every point. It should include both theory and practice...To learn life, read...Ruskin, Walt Whitman, Goethe, Carlyle...read such Mystics as Jacob Boehme, St. John of the Cross..."

Published by Skeffington & Son, Publishers to His Majesty the King, London, 1903.

Copy of GEORGE W. SOUTHWICK, noted collector of theological books, with his signature on the front pastedown..

GOOD condition, The covers bottom corner tips are bumped and there is a bit of pushing at the top of the spine, else the covers are solid and attractive with bright spine gilt. The top page edges have browned. Internally, there is the signature of George W. Southwick on the front pastedown, as noted above, some offsetting and light foxing to the first few pages, otherwise the pages are tight, bright, clean and unmarked. A solid, nice, very presentable copy.

******Reverend George William Allen was an important figure in the esoteric religious and cultural movements that swept North America and Europe at the turn of the twentieth century. He had significant influence over the movements that determined the cultural and religious avant garde of the Western world from 1880 to 1914, including mystical theosophy. Allen's dream theory, contemporary to Freud's, emphasized the notion that ordinary reality was a false state and that the waking up process was linked to mystical connections and thus the one sure way to self knowledge. Allen's influence lasted well into the twentieth century, even affecting poets such as Yeats and Pound. There has recently been renewed interest in G.W. Allen. A biography on Allen was published in 2019 written by the noted philosophy professor Jeffrey Lavoie titled: George William Allen and Christian Socialism.******

******George W. Southwick, b.1918 d.2006, was a well known figure in Pentecostal churches in Southern California. He held ordination in four different bodies: International Church of the Foursquare Gospel; Assemblies of God; Whosoever Will; and Apostolic Holiness. He was a Bible teacher and noted collector of theological books and periodicals. Southwick developed a significant collection consisting of 4,000 books, as well as numerous periodicals, tracts, pamphlets, photographs, and other archival materials, much of it quite rare. After his death...his collection was donated to the Flower Pentecostal Heritage Center "FPHC". Southwick held to Oneness, Anglo-Israel, Calvinist, and Latter Rain beliefs, and much of his collection represented those minor traditions within Pentecostalism. This important collection includes many publications that are not otherwise accessible to researchers.******