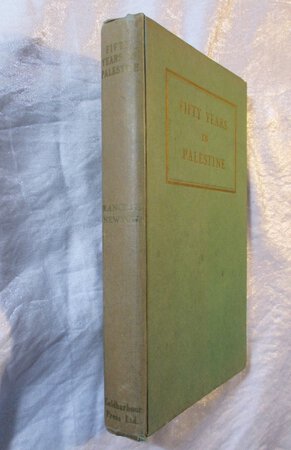 Maadi, Egypt. Her name and Egypt address are written on the front free endpaper. Nice that a woman living in Egypt owned this book! Subsequently owned by GEORGE W. SOUTHWICK, a noted collector of theological books, with his signature on the front pastedown.

About FRANCES E. NEWTON (from Wikipedia):

******Frances Emily Newton, b.1871 d.1955, was an English missionary who lived and worked in Palestine from 1889 until 1938, the last 18 years of which saw the country under British rule. She became Dame of Justice of the Venerable Order of Saint John in 1930, and was a member of the Palestine Women's Council, a consultative committee that advised the British on matters affecting women and children. She was said to have "the exterior of an English woman and the mind of a Palestinian".

She was a founding member and honorary secretary of the Palestine Information Centre, referred to by the British Arab News Bulletin as the "first office to put the Arab view before the British public." Described by Norman Bentwich, the first Attorney General of Mandatory Palestine, as "incurably anti Jewish ... and a principal supporter of the Arab cause". She also founded the Anglo-Arab Friendship Committee in 1946, with the aim of opposing Zionism.

Living on Mount Carmel in Haifa, Newton became known as someone willing to document acts of violence against Arabs suspected of opposing British rule. She found herself in trouble in 1938 after publishing two pamphlets, Punitive Methods in Palestine, which accused the British of atrocities, and Searchlight on Palestine: Fair Play or Terrorist Methods, which supported the 1936-1939 Arab revolt. The British issued an exclusion order and she was deported in October 1938. The exclusion order was lifted in 1943. Frances E. Newton died in Chelsea of a heart attack in 1955.******

******George W. Southwick, b.1918 d.2006, was a well known figure in Pentecostal churches in Southern California. He was a Bible teacher and noted collector of theological books and periodicals. Southwick's collection consisted of 4,000 books, as well as numerous periodicals, tracts, pamphlets, photographs, and other archival materials, much of it quite rare. After his death, his family gave the collection Flower Pentecostal Heritage Center "FPHC". This important collection includes many publications that are not otherwise accessible to researchers.******