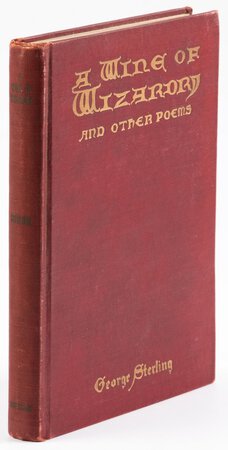 A WINE OF WIZARDRY AND OTHER POEMS, by GEORGE STERLING. His scarce second book.

Published by A. M. Robertson, San Francisco, 1909. First edition, first printing, with the date 1908 on the copyright page and 1909 on the title page with no indication of additional printings (this book was copyrighted 1908 a few months before it was actually published in 1909).

SIGNED and INSCRIBED by GEORGE STERLING on the front free endpaper: "With the best wishes of / George Sterling". Above Sterling's inscription is the previous owner's signature "J. E. Rankin", likely to whom the book is inscribed. There is a James Rankin, a businessman from Martinez California, who was an early member of the Bohemian Club, but from the little I can find it seems he died in 1901, and if so, it's not him.

Also, HANDWRITTEN BY GEORGE STERLING on a blank prelim is the entire LAST STANZA of his POEM "The Night of the Gods", which is printed in its entirety on page 48. This manuscript poem is SIGNED by STERLING, and in a bottom corner of the page he wrote "Page 48".

Hardcover Book, burgundy cloth covered boards embossed in gilt, 5x8 inches, 137 pages. There is no embossed fountain on the front cover which, as I was once told by the late Peter Howard of Serendipity Books, Berkeley, indicates a first state cover, but I have not been able to verify this with certainty one way or the other.

In addition to numerous poems the book contains Sterling's play written in verse titled Triumph of Bohemia. It is basically Sterling's tribute to the Bohemian Club. The play was performed as the Bohemian Grove Play of 1907.

GOOD condition: The covers are lightly rubbed at the corner tips and spine ends, and darkened at the spine making the spine titling almost illegible (visible upon close examination), otherwise the covers are solid and clean, and the front cover gilt remains bright. Internally, the front and rear inner hinges are cracked but holding well, the front and rear flyleaf are browned, the front free flyleaf is has a vertical crease near its gutter edge making the joint somewhat tender, otherwise the inner pages are very nice, they have all been carefully cut open and are tight, bright, clean, clear and unmarked.

A WINE OF WIZARDRY is one of George Sterling's most hard to find books, especially so INSCRIBED, SIGNED (twice), and with a HANDWRITTEN POEM.

******George Sterling, b.1869 d.1926, was an American writer based in San Francisco and Carmel-by-the-Sea. He was a prominent poet, playwright, and Bohemian.

Sterling joined the Bohemian Club and acted in their theatrical productions each summer at the Bohemian Grove. For the Grove play of 1907 the Club presented Sterling's "The Triumph of Bohemia", a drama depicting the battle between the Spirit of Bohemia and Mammon for the souls of the Grove's Woodmen.

After Sterling's poem A WINE OF WIZARDRY was published in the September 1907 issue of Cosmopolitan, Ambrose Bierce wrote a review that stated: "Whatever length of days may be accorded to this magazine, it is not likely to do anything more notable in literature than it accomplished in this issue by the publication of Mr. George Sterling's poem, A Wine of Wizardry." Bierce also wrote to Sterling: "I hardly know how to speak of it. No poem in English of equal length has so bewildering a wealth of imagination. Not Spencer himself has flung such a profusion of jewels into so small a casket".

Despite such famous mentors as Ambrose Bierce and his long association with Jack London, Sterling himself never became well known outside California.