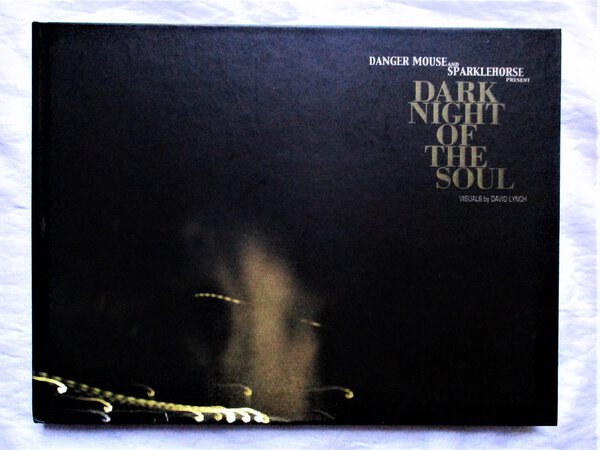 DARK NIGHT OF THE SOUL. Written by DANGER MOUSE and SPARKLEHORSE (aka MARK LINKOUS), with Photography by DAVID LYNCH.

LIMITED, NUMBERED, FIRST EDITION, this being hand numbered copy 4137 of 5000. Though not called for, this copy is SIGNED by all the contributors. It is one of the only such copies I have seen.

NEAR FINE condition, light rubbing to the covers, otherwise tight, bright, clean and clear. The signatures are bold and bright. The CD is fine.

This SIGNED COPY is RARE, especially so with the signature of Mark Linkous / Sparklehorse.

SPARKLEHORSE aka MARK LINKOUS, b.1962 d. 2010, was a guitarist, singer, songwriter, from Richmond, Virginia. He released four acclaimed albums and collaborated with Tom Waits, the Flaming Lips, Thom Yorke of Radiohead, and many others. MARK LINKOUS COMMITTED SUICIDE in 2010 in Knoxville Tennessee, not long after this book was released.

DANGER MOUSE is an eleven time Grammy Award nominated; two time Grammy Award winning artist and producer. In a short time, he has created a diverse body of work, including albums with Beck, the Black Keys, Gorillaz, and his own hugely successful band Gnarls Barkley. He was recently named one of Esquire's 75 most influential people of the 21st Century.

David Lynch is a renowned filmmaker.