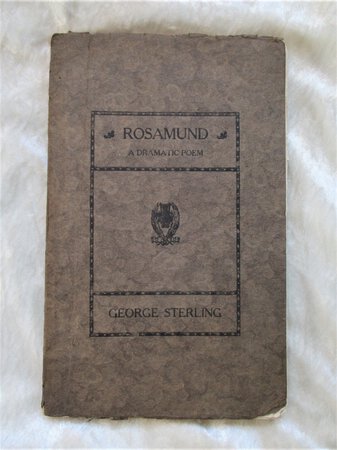 Published by A. M. Robertson, San Francisco, 1920. First edition, first printing, with the date 1920 on both the title page and copyright page with no indication of additional printings.

Limited Edition of only 500 copies, this being hand numbered copy 188, as shown on the limitation page (the last page).

SIGNED, INSCRIBED and DATED by GEORGE STERLING to CLARE SHERIDAN on the front free endpaper: "For Clare Sheridan, This melodrama of another 'golden lily,' without apologies for her conduct. George Sterling. San Francisco, Oct. 11th, 1921."

Clare Consuelo Sheridan (née Frewen) b.1885 d.1970, was an English sculptor, journalist and writer known primarily for creating busts of the famous (including her cousin Winston Churchill) and writing diaries recounting her worldly travels. She enjoyed travelling around the world; and among her circle of friends were Princess Margaret of Sweden, Lord and Lady Mountbatten, Lady Diana Cooper, Vita Sackville-West and Vivien Leigh. She led an adventurous life. Please read all about her on her Wikipedia page.

GOOD MINUS condition: The covers are worn at the corners and edges, the spine covering is missing its top 1 inch, has some scrapes, and is splitting at the bottom rear fold for about 2 inches, the front cover has a stiff and tender crease where it was attached to the front free endpaper, nonetheless these original covers are still holding and doing their job; there is a crease to the upper front corner of the book leaving a crease at that corner of the covers and inner pages; internally the staples binding the text block are rusting, the pages are tight, bright, clean and clear. A used copy that remains solid and presentable.

A wonderful Signed and Inscribed copy with a great Association to an impressive English woman.

******George Sterling, b.1869 d.1926, was an American writer based in the San Francisco, California Bay Area and Carmel by the Sea. He was considered a prominent poet and playwright and proponent of Bohemianism during the first quarter of the twentieth century. His work was admired by writers as diverse as Jack London, Upton Sinclair, Theodore Dreiser, and Sinclair Lewis.

In 1905 Sterling moved to Carmel by the Sea, California, an undeveloped coastal area, and soon established a settlement for like minded Bohemian writers. Carmel had been discovered by Charles Warren Stoddard and others, but Sterling made it world famous.