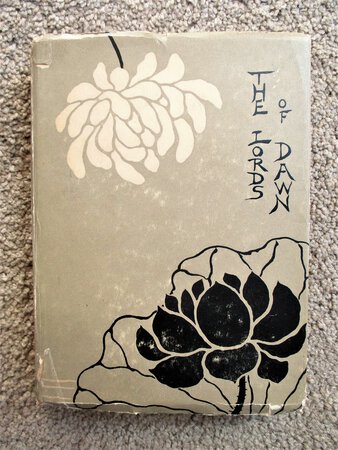 THE LORDS OF DAWN, by George Turner Marsh and Ronald Temple. With ILLUSTRATIONS by CHIURA OBATA.

SIGNED, INSCRIBED and DATED on the front free endpaper by the author GEORGE TURNER MARSH (founder of the first Asian Art Gallery in the U.S., and creator of San Francisco's TEA GARDEN in Golden Gate Park - see below).

Copy of LANGLEY PORTER, to whom the book is inscribed, with his personal bookplate on the front pastedown.

Published by John J. Newbegin, San Francisco, 1916. First Edition, as shown by the date 1916 on the title page and copyright page with no indication of additional printings.

Hardcover book, plain card covers with dustjacket, dustjacket is glued on at the spine making it an integral part of the book, 6x8 inches, 304 pages.

ILLUSTRATED with b&w drawings at the head of each chapter by Chiura Obata, who was a noted Japanese-American artist and Professor at UC Berkeley.

Condition: GOOD book, the plain card covers are toned at the margins, and lightly bumped at the corners; internally, the front inner hinge is split but holding, otherwise the inner pages are bright, clean, clear and unmarked; in a FAIR dustjacket that is chipped and worn at the corners, spine ends, and edges, and is rubbed at the folds, but is complete and attractive.

Rare SIGNED and INSCRIBED by the AUTHOR, with a nice association to LANGLEY PORTER.

About the Author GEORGE TURNER MARSH (from the Online Archive of California website):

******George Turner Marsh, b.1857 d.1932, was born in Richmond, Australia; son of Stephen Hale Marsh, who was court musician to Queen Victoria. When George Marsh was 15 years old his family moved to San Francisco, California. On the journey they stopped in Japan and the young Marsh fell in love with both the country and culture. In 1876, he founded G.T. Marsh & Company: Japanese Art Repository, at the Palace Hotel in San Francisco. It is considered to have been the first Asian art gallery in the United States.

About R. LANGLEY PORTER to whom the book is inscribed and whose personal bookplate is on the front pastedown (from a University of California website):

Dr. Langley Porter was Dean of the School of Medicine of the University of California in San Francisco in the 1930s, He had for a long time envisioned that a neuropsychiatric institute would greatly improve the scope of teaching and research on the San Francisco campus. Through his efforts the cornerstone for some an institute was laid on April 5, 1941. It was named in his honor.******

About the Artist CHIURA OBATA (from Wikipedia):

******Chiura Obata, b. 1885 d, 1975, was a well known Japanese American artist and popular University of California, Berkeley, art teacher. Obata emigrated to the United States in 1903, at age 17. After initially working as an illustrator and commercial decorator, he had a successful career as a painter and a faculty member in the Art Department at the University of California, Berkeley. His career was interrupted by World War II when he spent over a year in internment camps. During his life he was a leading figure in the Northern California art scene.******