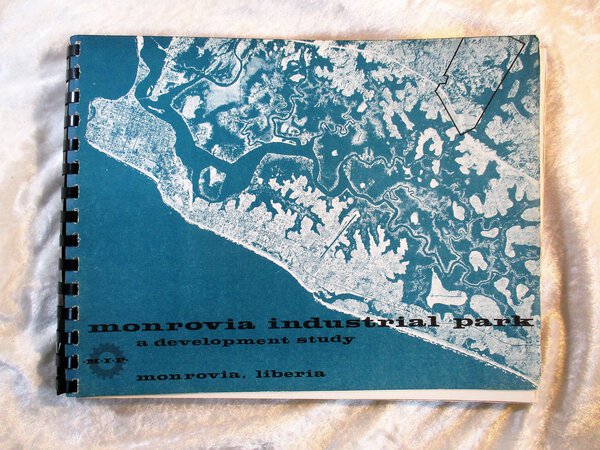 A DEVELOPMENT STUDY and PRELIMINARY DESIGNS for an INDUSTRIAL PARK in MONROVIA, LIBERIA. October, 1964.

"A discussion of factors affecting the development of an industrial park in the Monrovia Area and a preliminary comprehensive site plan for the 1,000 acre site selected."

Softcovers, plastic spiral bound, 8.5x11 inches oblong, 77 pages, pages printed on one side only. Illustrated with some maps, drawings and tables.

In 1964 the MONROVIA INDUSTRIAL PARK DEVELOPMENT STUDY was produced. In 1965 development began based on the study. There were high hopes for this industrial park. It was believed that, when successful, it could be replicated throughout Liberia and help lift the country economically.

Things didn't work out so well, as detailed in this 2017 "Update" from the Ministry Of Commerce & Industry "MoCI", Republic of Liberia (found online):

******The Monrovia Industrial Park was established through an Act of the Liberian National Legislature in 1965 to promote and incentivize domestic and foreign investments in manufacturing. The original land allocated for industrial development was 1,112 acres. Over time, the Park was heavily encroached upon by squatters and claimants. In 2013, a decision was reached to reclaim approximately 400 acres. Following a 2 year period of community engagement and legal action, Phase I, the demolition of an initial 200 acres, has been completed...Currently, three factories are fully operating inside the MIP: TIBA Group Industries produce biscuits and confectionery, NP Liberia packages cooking gas and Garson Steel manufactures wire nails...Many leaseholders still hold leases but are inactive. The MoCI is engaged in cancelling these inactive lease agreements...The construction of a wire fence around the MIP is 70% completed. While the poles and the mash between the polls are completed, the wire between the polls needs to be embedded in concrete and barbed wire needs to be installed on top.******

This 1964 Monrovia Industrial Park Development Study is a rare document showing the hopes Liberia had for economic development in 1964. Many years later this Industrial Park dream is in shambles. Why? Maybe because the planners and developers were from Washington D.C. and Atlanta, Georgia?