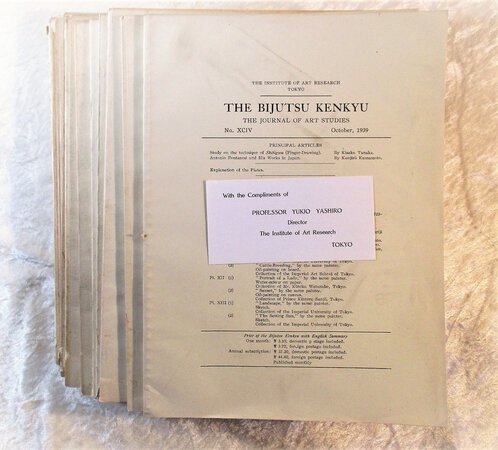 The Bijutsu Kenkyu was, and still is, an important journal for the study of Japanese and Asian Art, and European and American art as it relates to Asian Art. The early issues are rather hard to find.

Wrappers / Softcovers, 9x12 inches (22x30 cm), approximately 40 pages of text with in text b&w illustrations and 10 plates per issue (the number of text pages and plates does vary from issue to issue). Each issue came with a thin glassine overwrap, these have been removed from about half of the issues.

ILLUSTRATED with PLATES, including one tipped in color plate at the beginning of each issue.

Text in JAPANESE, but the rear wrapper of each issue gives a brief English description of the plates within.

These copies were presented "With the Compliments of PROFESSOR YUKIO YASHIRO", with his presentation card laid on top of the first issue. (Yukio Yashiro, b.1890 d.1975, was a Japanese academic, art historian, Botticelli scholar and Director of the Institute for Art Research in Tokyo. - Wikipedia.)

GOOD Condition: The glassine overwrap was removed from about half the issues, the glassine on the other issues has yellowed with age (it can easily be removed if desired); the spines have some wear and chipping; there is light dampstaining to the wrappers and on some of the inner pages of a few issues; overall the issues remain tight, bright, clean, clear and unmarked. Fifteen presentable copies. Great references.

A sampling of articles in the first few issues: Tthe Technique of Shitogwa (Finger-Drawing); Antonio Fontanesi and His Works in Japan; Panel Paintings of Kichijoten Shrine of Joruriji Temple; Five Hundred Arhats, by Ikeno Taiga; Study on Portraits of Goto Yujo and His Descendants; Study on the Biography of Uragami Gyokudo; Landscape of Four Seasons on Su Tung-P'o's Poems, by Shih-T'ao; Fragment of Wall-Painting of Fukiji Temple; Fragment of Wall-Painting of Fukiji Temple; Yashiro Yukio; Ise Monogatari Painted by Sotatsu.

About the Bijutsu Kenkyu Journal of Art Studies:

Published since 1932, the Bijutsu Kenkyu journal, edited by the Department of Art Research, has published monograms, research notes, explanations of plates, book reviews, exhibition reviews, and materials for art research, primarily pertaining to Japanese and East Asian classical art, but also European and American art that relates to modern and contemporary Japanese art. In its early years it was published monthly, but is now published three times a year.

INTERNATIONAL BUYERS PLEASE NOTE: This lot of 15 issues is heavy and will require substantial additional shipping charges. After placing your order you will be notified of the additional charges and be able to accept or reject them before your payment is processed. Or you can contact us ahead of time to find out the shipping charge to your country. Thanks.