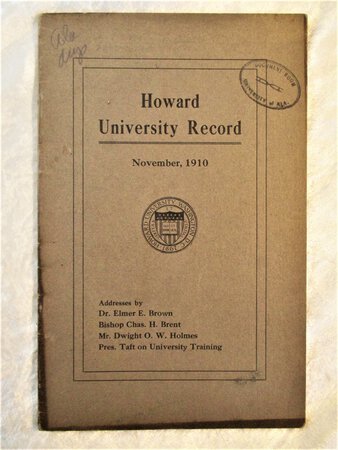 President Taft was an Honorary Member of the Board of Trustees of Howard University, as stated on the list of Board Members printed on the inside rear cover.

GOOD condition: Near the top of the front cover is an oval ink stamp that reads "Document Room / University of Alabama" and the handwritten statement "Ala. Dup" (Alabama Duplicate); there is a brown stain to the spine fold and bottom edge of the front cover; internally, there are a few fingerprint size smudge stains and a bit of edge wear here and there, otherwise tight, bright, clear and unmarked. A solid, presentable copy.

A thin but Important booklet from 1910, with notable comments by President Taft on the need for reparations for African Americans.