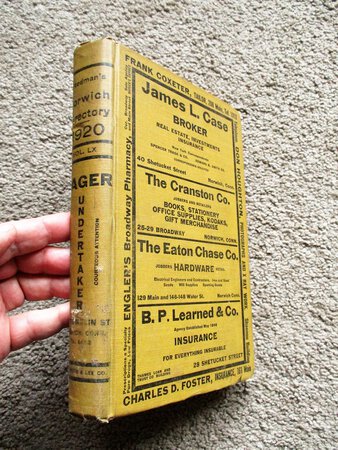 Complete, including the folding map which is often lacking.

Published by Price & Lee Co., Norwich, Connecticut, 1920. This is an Original, Vintage Directory.

Contains numerous advertisements of the day, including an advertising section at the front. These directories were published as advertising vehicles so ads are everywhere, including the covers and page edges.

This volume was part of the amazing SUTRO GENEALOGICAL LIBRARY of SAN FRANCISCO, CALIFORNIA. There are some Sutro and related library ink stamps and marks here and there. The Sutro Library was (and to a large part still is) a treasure trove of genealogical books collected by Adolph Sutro and donated to the City of San Francisco. The collection was pretty much neglected by the City until, in 2012 the City gave the collection to the library of San Francisco State University. Before and after the move to SFSU, quite a few volumes from the Sutro genealogical library were, sadly, deaccessioned, so that the collection would fit it into its new space. In its new home the Sutro Library is still considered to have the best genealogical collection west of Salt Lake City, and is now much better cared for, it's just not as large as it was. Once these wonderful deaccessioned Sutro genealogy books find new homes they will likely not be seen again for some time.

FAIR CONDITION: The boards are worn through at the corners, pushed at the spine ends, have some scrapes, and have remnants of a shelving label on the spine. Internally, there are Sutro ink stamps and related marks on the front endpapers (including a withdrawn stamp), the front inner hinge is split and the rear inner hinge is cracking but both remain well bound, there are a couple light stains here and there, otherwise the inner pages are tight, bright, clean and clear. The map has a 3 inch closed tear starting at its left side and a 2 inch tear starting at a bottom fold; the map is somewhat tender so open carefully, but it is bright, clean, clear and unmarked. A solid and presentable copy, with its map.

An Original NORWICH, CONNECTICUT, City Directory from 1920. A treasure trove of Connecticut genealogy.