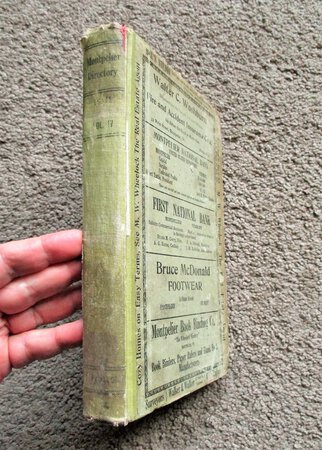 The title page says that the volume has a map, but either the map is lacking or it was never actually bound into this edition. To be clear, there is NO map present in this volume.

Published by H.A. Manning Co., Springfield, Massachusetts, 1911. This is an Original, Vintage Directory.

Contains numerous advertisements of the day, including an advertising section at the front. These directories were published as advertising vehicles so ads are everywhere, including the covers and page edges.

This volume was part of the amazing SUTRO GENEALOGICAL LIBRARY of SAN FRANCISCO, CALIFORNIA. There is a Sutro Library bookplate on the front pastedown, and Sutro and related library ink stamps, labels and marks on the front endpapers and here and there. The Sutro Library was (and to a large part still is) a treasure trove of genealogical books collected by Adolph Sutro and donated to the City of San Francisco. The collection was pretty much neglected by the City until in 2012 the City gave the collection to the library of San Francisco State University. Before and after the move to SFSU quite a few volumes from the Sutro genealogical library were, sadly, deaccessioned so that the collection would fit it into its new space. In its new home the Sutro Library is still considered to have the best genealogical collection west of Salt Lake City, and is now much better cared for, it is just not as large as it was. Once these wonderful deaccessioned Sutro genealogy books find new homes they will likely not be seen again for some time.

Only FAIR CONDITION: The paper covered boards are worn through at the corners and edges, and are worn and rubbed at the front and rear panels; the cloth covered spine is worn and peeling at the folds and spine ends, the boards are rubbed and soiled; nevertheless the covers are original and still doing their job. Internally, the front and rear inner hinges are split but holding; there are Sutro and related library ink stamps, labels and marks as noted above; there is clear tape repair to a number of pages; the green pages (advertising pages) are toned at the margins; one page of the green ads is heavily chipped along the edges and has been taped in; there are blue check marks by a few names; the inner text block hinge is split at a few places but holding. Well used, but complete.

An Original MONTPELIER, VERMONT, City Directory from 1911. A treasure trove of Vermont genealogy.