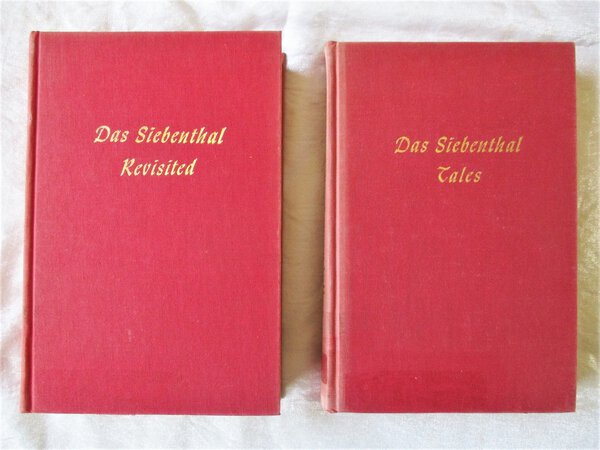 DAS SIEBENTHAL REVISITED: TALES of the PEOPLE of the SEVEN VALLEYS of PENNSYLVANIA, by Armand Gladfelter. Published by Mehl Ad-Associates, York, Pennsylvania, [1981].

TWO VOLUMES being sold together.

Both volumes are SIGNED and INSCRIBED by the AUTHOR on the front free endpaper. One volume also signed by Dorothy Henry Gladfelter, the author's wife.

Ex-lib aside the books are in GOOD condition, the covers have the ghost of a sticker at the bottom of the spine and at the bottom margin of the front cover, there is sunning to the spines, and a bit of shelf wear to the bottom edges; there is light soiling to the page edges; internally the pages are tight, bright, clean and clear. Very presentable copies, even being ex-lib.

About ARMAND GLADFELTER and DOROTHY HENRY GLADFELTER (from a 2017 article in the York Dispatch):

Armand Gladfelter was president of A.C. Henry Inc. for 17 years and a vice president of the Spring Grove Area school board. He was also a well known local historian who wrote books on the Seven Valleys Area.

Dorothy Gladfelter served as president of the Pennsylvania Music Teachers Association and was a member of the York Historical Society. She taught piano for 72 years.

"The Gladfelters were York County people, born and bred, and loved everything about it, including York College," said Bob Iosue, former president of York College. "The level of their bequest is an expression of their love of York County."******

About Rev. Joseph Hilbert, to whom the books are inscribed: (from a 2012 article in the LNP - a Lancaster Newspaper):

******Joseph Hilbert, 85, a priest at St. Joseph's Catholic Church in Lancaster, Pennsylvania, said he never thought of taking another path in life. He attended St. Charles College at age 16, then went on to St. Charles Borromeo Seminary in Philadelphia.

Hilbert, who recently celebrated 60 years of ordination, was a principal for 10 years at Lebanon Catholic High School. He then moved to Bishop McDevitt in Harrisburg for three years. He worked with migrant Mexican farm workers from 1981 until 2002, when he retired at age 75 and came back to St. Joseph's, his home parish, to be close to his family.******

So much love for York County and Seven Valleys!

INTERNATIONAL BIDDERS PLEASE NOTE: This lot of two books will require additional shipping charges. After placing your order you will be notified of the charges and be able to accept or reject them before payment is taken. Thanks!