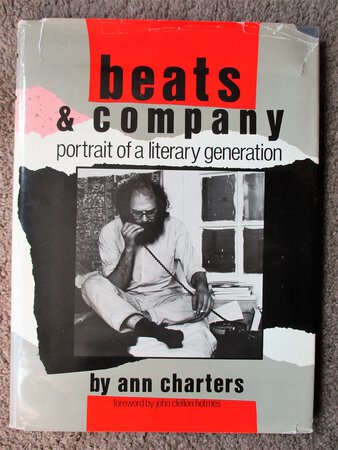 BEATS & COMPANY : PORTRAIT OF A LITERARY GENERATION, by ANN CHARTERS.

Published by Doubleday & Company / a Dolphin Book, New York, 1986. First edition, first printing, as indicated by the statement "First Edition" on the copyright page, and with the date 1986 on the title page and copyright page with no statement of additional printings.

RICHLY ILLUSTRATED with b&w (and a few color) PHOTOGRAPHS of BEAT WRITERS taken by ANN CHARTERS over many years. The writers whose photographs are included are indexed by name at the rear.

Condition: GOOD PLUS book, the covers have just a bit of wear to the corner tips and spine ends, and a bit of shelf rubbing to the bottom edges, very solid and nice; internally there is some light toning and waviness to the top margin, otherwise tight, bright, clean and unmarked. In a FAIR price-clipped dustjacket that has tears, creases and chips to its top edge and lesser so at its bottom edge; and clear tape repair / reinforcement to the backside along the edges; despite the flaws the dustjacket is bright and still doing its job well.

What makes this copy special is that LAID IN is a HANDWRITTEN card from SAMUEL CHARTERS to his longtime FRIEND and PUBLISHER, ROBERT HAWLEY, owner and operator of OYEZ PRESS. It is dated November 22, 1982, and reads:

"Robert / So good to hear your voice, even though it is such a strained time for you. Things must get better. We try to think of some way to help, if there's anything please let us know. I'm off to Louisiana next week, then we leave shortly after. Plans - Dec. 17 to England - Travel with Mallay (his daughter) then she goes back to her school. After January 20 we are at the old address - Värmdövägen 215, 3141 Nacka, Sweden. Much, much to do before we leave, but I don't think it will overwhelm us. Annie's (his wife Ann Charters) Beat encyclopedia is being pasted up now and looks very exciting. You should receive your copy in early spring. // We love you all and think of you. / Be well / Sam"

The card was written at a time when Robert Hawley and Oyez Press were having serious financial difficulties. Ann Charters' "Beat Encyclopedia" referenced in this 1982 card was published in 1983 as a two volume set titled "The Beats, Literary Bohemians in Postwar America". Oyez Press published a number of books by Samuel Charters and Ann Charters, starting in 1968.

Also LAID IN is a small note from ANN CHARTERS to DOROTHY and ROBERT HAWLEY. Likely circa 1999 or 2000, as it references her book published in 1999. It reads:

A LOVELY NETWORK OF ASSOCIATIONS BETWEEN SAM CHARTERS, HIS WIFE ANN CHARTERS, ROBERT AND DOROTHY HAWLEY, OYEZ PRESS, AND THE BEATS.

About ANN CHARTERS (from Wikipedia): "Ann Charters, b. 1936, is a professor of American Literature at the University of Connecticut. She worked with Jack Kerouac to compile his bibliography. After his death she wrote the first Kerouac biography. She edited the two volume encyclopedia The Beats: Literary Bohemians in Postwar America and has published a collection of her photographic portraits of Beat writers in the book Beats & Company."

About SAMUEL CHARTERS (from Wikipedia): "Samuel Barclay Charters IV, b.1929 d.2015, was an American music historian, writer, record producer, musician, and poet. He was a widely published author on the subjects of blues and jazz."

About ROBERT HAWLEY and the OYEZ PRESS (from an online Obituary): "Robert Lorin Hawley, b.1929 d.2017, was a noted antiquarian bookseller and cofounder of the Oyez Press. In 1964, Hawley cofounded the Oyez Press. Oyez published works by noted SF Bay Area Beat Writers. Its poetry editions were well regarded for the simplicity and elegance of their designs. At its height Oyez was publishing about ten books a year."