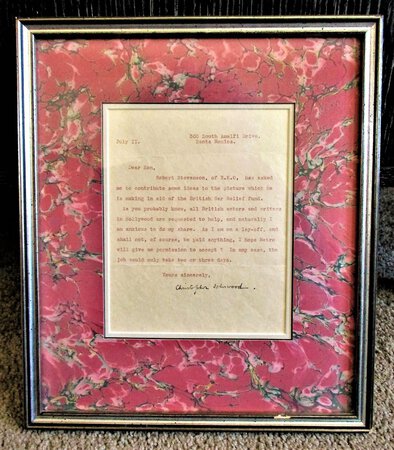 LETTER by CHRISTOPHER ISHERWOOD to an Executive at METRO-GOLDWYN-MAYER seeking permission to work, without pay, on a British War Relief film that was being made by RKO Pictures.

Single page typed letter, signed, framed, 6x8 inches (perhaps a bit more beneath the mounts). The letter has the return address of 303 South Amalfi Drive, Santa Monica (California). It is addressed to an unknown (to me) MGM exec named Ken, and is dated July 11, (likely circa 1940).

"Dear Ken, / Robert Stevenson, of R.K.O., has asked me to contribute some ideas to the picture which he is making in aid of the British War Relief fund. / As you probably know, all British actors and writers in Hollywood are requested to help, and naturally I am anxious to do my share. As I am on a lay-off, and shall not, of course, be paid anything, I hope Metro will give me permission to accept ? In any case, the job would only take two or three days. / Yours sincerely, / Christopher Isherwood (signed)".

The letter is framed with two mounts, the upper mount being marbled. The frame measures 11.5x13.5 inches. It is sealed with brown paper on the backside and has a metal hanging wire.

I have not inspected the letter outside of the frame, but it appears in NEAR FINE condition, as do the mounts. The frame is solid, it is wood and has a number of small scrapes and indents.

Christopher Isherwood moved to Hollywood in 1939 and went under contract with MGM for the year 1940-1941.

Isherwood was involved with many Hollywood films, as screenwriter, co-screenwriter, and as the writer upon which films were based. The film CABARET was based on his story "Goodbye to Berlin".