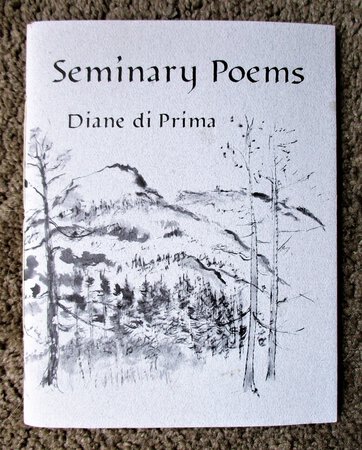 SIGNED by di Prima on the title page below her printed name.

First Edition of only 2000 copies, as indicated on the Colophon page (the last page).

A scarce work by this female beat poet, one of the few women "Beats".

Di Prima published more than 40 books. With Amiri Baraka, she co-edited the literary magazine The Floating Bear from 1961 to 1969. She co-founded the Poets Press and the New York Poets Theatre and founded Eidolon Editions and the Poets Institute. A follower of Buddhism, she also co-founded the San Francisco Institute of Magical and Healing Arts.

Di Prima was named Poet Laureate of San Francisco in 2009. She was awarded the National Poetry Association's Lifetime Service Award and the Fred Cody Award for Lifetime Achievement, and she also received grants from the National Endowment for the Arts, the Committee on Poetry, the Lapis Foundation, and the Institute for Aesthetic Development. St. Lawrence University granted her an honorary doctorate.

Diane di Prima died on October 25, 2020 in San Francisco. She was one of the first women Beat writers, and a major figure in the group known as Women of the Beat Generation.******