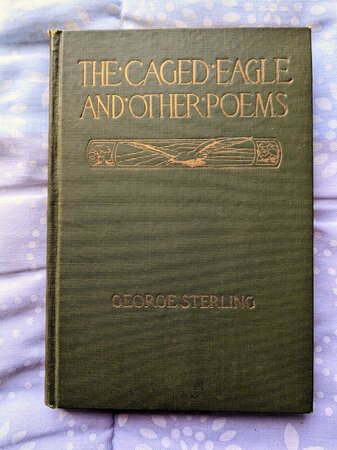 THE CAGED EAGLE AND OTHER POEMS, by GEORGE STERLING.

Published by A. M. Robertson, San Francisco, 1916. First edition, first printing, with the date 1916 on both the title page and copyright page, no indication of additional printings, and the printer's mark at the bottom of the copyright page.

HAND SIGNED by GEORGE STERLING on the title page..

GOOD condition: The front cover gilt has faded but is fully legible, the spine gilt has faded away, there is some wear to the spine ends, else these original covers are sturdy and doing their job well. Internally, there is a previous owner's bookplate on the front pastedown "W.R. Heyneman" (the bookplate has left a ghost image on the facing front free endpaper), there is browning / offsetting to the endpapers (as is the case with every copy of this book I have seen), otherwise the pages are tight, bright, clean and clear, with many pages still uncut at the front fold. A solid, nice copy.

******George Sterling, b.1869 d.1926, was an American writer based in the San Francisco, California Bay Area and Carmel-by-the-Sea. He was considered a prominent poet and playwright and proponent of Bohemianism during the first quarter of the twentieth century. His work was admired by writers as diverse as Jack London, Upton Sinclair, Theodore Dreiser, and Sinclair Lewis.

In 1905 Sterling moved to Carmel-by-the-Sea, California, an undeveloped coastal area, and soon established a settlement for like minded Bohemian writers. Carmel had been discovered by Charles Warren Stoddard and others, but Sterling made it world famous.