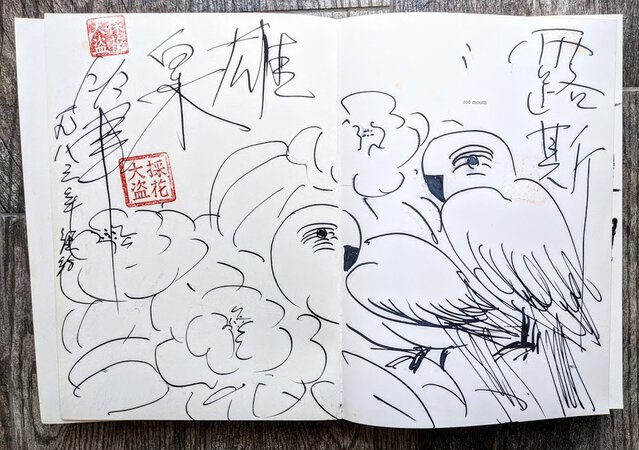 RED MOUTH. An ART and POETRY MONOGRAPH by WALASSE TING.

SIGNED with a two page DRAWING by the ARTIST.

The UNIQUE, ORIGINAL, INK DRAWING, by WALASSE TING, SIGNED with TWO ARTIST STAMPS, is on the half-title page and the facing blank page. The drawing contains iconic Walasse Ting images of PARROTS and FLOWERS.

RICHLY ILLUSTRATED with MANY FULL PAGE COLOR PLATES (two are triple folded) and reproductions of 33 b&w drawings. There is also a section of Visual Poetry (aka Concrete Poems).

VERY GOOD condition, a piece of clear tape is at the top and bottom of the covers' spine (presumably simply for reinforcement), there is some light foxing to the top page edges (edges of the closed book) and just a touch of foxing to the first and last few pages. Overall a solid, very nice copy that is tight, bright, clean, clear and unmarked. Made incredible with the artist's two page hand drawing.

This is your chance to own an ORIGINAL SIGNED INK DRAWING by the highly regarded artist WALASSE TING.

About WALASSE TING from Wikipedia and other Internet sites):

*****Walasse Ting, b.1929 d.2010, was a visual artist and poet. His colorful paintings have attracted critical admiration and a popular following. Common subjects include nude women and animals, especially cats and birds.

He was born in Shanghai, left China in 1946 and lived for a while in Hong Kong, then settled in Paris in 1952. There, he associated with artists such as Karel Appel, Asger Jorn, and Pierre Alechinsky, members of the avant-garde group CoBrA.

In 1957, he moved to the United States, and settled in New York where his work was influenced by pop art and abstract expressionism. He became close friends with Andy Warhol and Roy Lichtenstein. He and Sam Francis became life long friends.

His works are found in the permanent collections of many museums worldwide, including the Guggenheim Museum, New York; Museum of Modern Art, New York; Art Institute of Chicago; Tate Modern, London; Centre Pompidou, Paris and the Hong Kong Museum of Art, among others.******