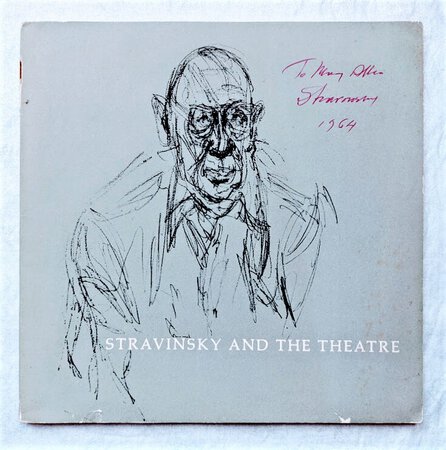 1963 STRAVINSKY AND THE THEATRE - Hand SIGNED, INSCRIBED & DATED by the COMPOSER

STRAVINSKY AND THE THEATRE: A Catalogue of Decor and Costume Designs for Stage Productions of His Works 1910-1962.

SIGNED, INSCRIBED and DATED by STRAVINSKY in red ink on the front cover: "To Mary Allen / Stravinsky / 1964".

Published by the New York Public Library, New York, 1963. First edition, as indicated by the date 1963 on the title page and copyright page, with no statement of additional printings.

The catalogue accompanied a 1963 New York Public Library exhibition featuring the designs and costumes of Stravinsky's major stage works in their initial and later productions. The front cover illustration is a reproduction of Giacometti's drawing of the composer. Stravinsky's stage collaborators included Chagall, Cocteau, Disney, Depero, Matisse, Noguchi, Picasso, Rauschenberg, and many others.

GOOD condition, the front upper corner of the catalogue is creased, leaving a crease to that corner of the covers and inner pages; the covers have some edge wear including a few edge scarpes; the spine's front fold has a thin 1 inch split; otherwise a solid, bright, presentable copy.

RARE and WONDERFUL with the SIGNATURE and INSCRIPTION of one of the greatest composers of the 20th century, IGOR STRAVINSKY.

About Stravinsky (from Wikipedia):

******Igor Fyodorovich Stravinsy, b.1882 d.1971, was a Russian composer, pianist and conductor, later of French (from 1934) and American (from 1945) citizenship. He is widely considered one of the most important and influential composers of the 20th century.

Stravinsky's compositional career was notable for its stylistic diversity. He first achieved international fame with three ballets commissioned by the impresario Serge Diaghilev and first performed in Paris by Diaghilev's Ballets Russes: The Firebird (1910), Petrushka (1911), and The Rite of Spring (1913). The latter transformed the way in which subsequent composers thought about rhythmic structure and was largely responsible for Stravinsky's enduring reputation as a revolutionary who pushed the boundaries of musical design.******