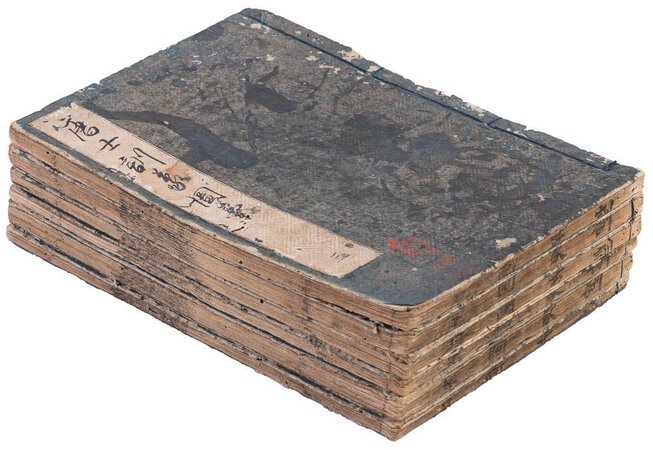 An ILLUSTRATED ENCYCLOPEDIA of CHINA.

Six Books containing 14 volumes. TEXT in JAPANESE, except for an Introductory Volume of Text (including a Preface) which is in CHINESE.

FAIR condition: Wear, rubbing and scraping to covers with some loss, worming mainly to the upper margins but pages here and there with worming on the images as well, some staining and soiling to a few pages; overall a complete set of these 6 books / 14 volumes, with text that is fully legible and images that are bright and clear.

This over 400 year old 1719 Illustrated Encyclopedia of China is RARE. The Metropolitan Museum of Art, Department of Asian Art, holds a set of this 1719 work. The Smithsonian holds a later 1802 edition.

About the Morokosh Kinmo zui (from a University of British Columbia website):

******The Morokoshi Kinmo zui, also called "Enlightening Illustrations of China", was first published in 1719 during the Tokugawa Period. It has since been replicated and reproduced many times. The Morokoshi Kinmo zui contains hundreds of black and white woodblock prints that encompass everything from Chinese cultural elements, architecture, regional Chinese plants and animals, and even types of humans.

The Morokoshi Kinmo zui is made up of 14 volumes that include: (1) Astronomy, (2) Geography, (3) Architecture, (4-5) People, (6) Martial Arts, (7) Instruments - weapons and tools, (8) Machines, (9) Instruments - agriculture and arms, (10) Ceremonial costumes and precious stones, (11-12) Botany and horticulture, (13) Birds and wild animals, (14) Fish, reptiles, and insects. These volumes are collected into a series of books (five plus a book of explanatory text), with each book containing anywhere from one to three volumes. Page layout varies from volume to volume, but all contain woodblock printed images accompanied by text.

The words and images of the Morokoshi Kinmo zui are produced by woodblock printing, and all images found in the volumes were created by Tachibana Morikuni. Morikuni belonged to the Kano school of Japanese art which began in the Tokugawa Period.******