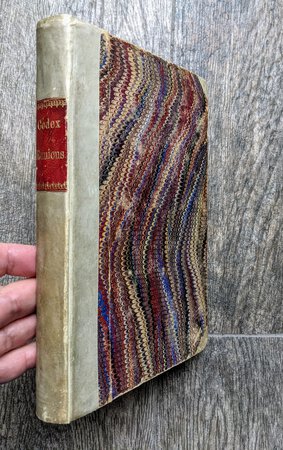 1877 ARNAMAGNAEANSKE MANUSCRIPT: CODEX RUNICUS in 100 PLATES + A Study of RUNES

(The ARNAMAGNAEANSKE MANUSCRIPT No. 28 / CODEX RUNICUS / Reproduced in Photolithography / Produced by the Commission for the Arnamagnaeanske Legacy.)

(Attached is a Study by P. G. Thorsen on the Use of Runes for Writing beyond the Monumental.)

GOOD condition. The covers are worn through at the corner tips and edges, rubbed, and lightly soiled, but still solid and doing their job well. Internally, the pages are lightly toned, there is some foxing, otherwise the pages are tight, bright, clean and unmarked. A solid, presentable copy of this 1877 book.

About the ARNAMAGNAEANSKE MANUSCRIPTS (from Wikipedia):

******The Arnamagnæan Manuscript Collection derives its name from the Icelandic scholar and antiquarian Arni Magnusson (Arnas Magnæus in Latinised form) b.1663 d.1730. In addition to his duties as Secretary of the Royal Archives and Professor of Danish Antiquities at the University of Copenhagen, he spent much of his life building up the collection of manuscripts that now bears his name. The majority of these manuscripts were from Arni's native Iceland, but he also acquired many important Norwegian, Danish and Swedish manuscripts. After being housed since Arni's death at the University of Copenhagen in the Arnamagnæan Institute, under a 1965 parliamentary ruling the collection is now divided between there and the Arni Magnusson Institute for Icelandic Studies in Reykjavík, Iceland. Altogether a total of 1,666 manuscripts, and all the Icelandic charters and apocrypha, have been transferred to Iceland, slightly over half the collection.

In 2009 the Arnamagnæan Manuscript Collection was added to UNESCO's Memory of the World Register in recognition of its historical value.******

About the CODEX RUNICUS (from Wikipedia):

The Scanian Ecclesiastical Law is a settlement detailing the administration of justice agreed upon by the Scanians and the archbishop of Lund in the late 12th century. The two law texts are written in the same hand, but the non-legal material of the codex, beginning on leaf 92, is believed to have been added in another hand, at a later date. The history section consists of a fragment of a list of Danish kings and a chronicle beginning with the legendary Danish king Hadding's son Frode and ending with Eric VI of Denmark. Following the historical texts is a description of the oldest border between Sweden and Denmark.

On the last leaf of Codex Runicus is a verse with musical notations - the first musical notations written in Scandinavia. It is the earliest written evidence of secular music in Denmark, a non-rhythmic notation on a four-line staff.******