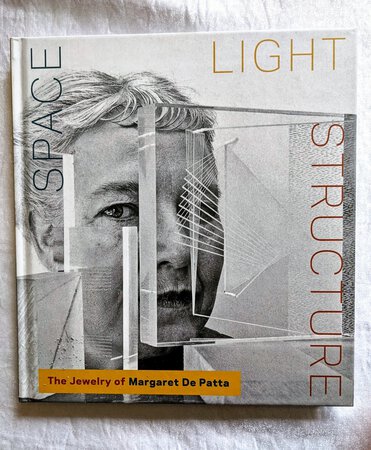 About MARGARET DE PATTA (from Wikipedia):

Her innovative jewelry was influenced by Bauhaus and Constructivism. De Patta first began experimenting with jewelry in 1929 when she made her own wedding ring. She was known for her innovative use of visual effects in her jewelry, such as light refraction, image reflection, and magnification, which she achieved through the design of her stones. She called her stones "opticut".

Her jewelry was featured in the 1939 Golden Gate International Exposition (GGIE) in San Francisco. In 1941 she studied under László Moholy-Nagy at the IIT Institute of Design in Chicago.

Margaret De Patta died in 1964 in a hotel room in San Francisco, from suicide.

Her work is collected in many major museums including the Smithsonian American Art Museum, Los Angeles County Museum of Art, Oakland Museum of California, among others.

The first major retrospective of her work, SPACE LIGHT STRUCTURE: THE JEWELRY OF MARGARET DE PATTA, opened at the Museum of Arts and Design in 2012 and travelled to the Oakland Museum of California that same year.******

Note: This 2012 book is hard-to-find. It should not to be confused with the 1976 exhibition catalog issued by the Oakland Museum of California.