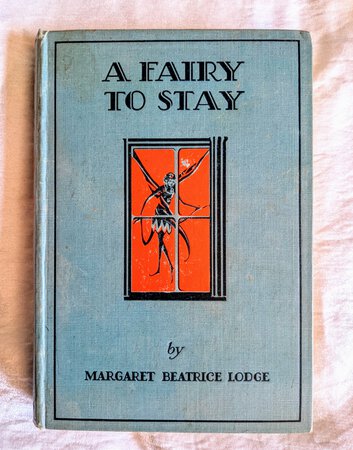 A FAIRY TO STAY, by Margaret Beatrice Lodge. Illustrated by A. H. Watson (Alice Helena Watson).

Published by Oxford University Press / Humphrey Milford, London, 1928. TRUE FIRST EDITION, with the statement: "Printed 1928 in Great Britain at the University Press, Oxford, by John Johnson", and with no indication of additional printings.

(WorldCat shows only six holdings of the 1928 edition, including one in the Victoria & Albert Museum. It also states that there were 6 editions published between 1928 and 1929. Any copy with a 1929 date, or a statement of a second or later printing, is a reprint, not a true first edition.)

ILLUSTRATED with 9 PLATES, a frontispiece plate in full color and 8 black and tan plates throughout.

GOOD condition: The covers are lightly soiled, have a bit of wear to the corner tips and spine ends, and the rear cover has some light stains including one that looks like the circular bottom of a tea cup; overall the covers are sturdy and attractive. The page edges (page edges of the closed book) have some foxing. Internally, there is some foxing and small age spots here and there, and there is a half-quarter size stain to the top blank margin of page 15, otherwise the inner pages are tight, bright, clean, clear and unmarked. A solid, presentable copy.

About the Book (from the Publisher):

******Pamela Perry lived with her elderly aunts because her mother had died and her father was working in East Africa. Pamela thought it was nicer when she was little and had a nurse to play with her and tell her stories, but Nurse left to get married and Pamela was now alone with the Aunts. The Aunts were very strict and decided that Pamela would be taught by them at home, instead of going to school. Lessons weren't very interesting. The Aunts decided that Pamela would grow her hair in a long braid, and all the other girls Pamela saw had short hair. One day, after Aunt Isabella found Pamela reading a book of fairy tales before her math lesson, Aunt Isabella declared Pamela was too old for such books and took it away. That day, Pamela cut her braid off with the Aunts' scissors. In disgrace, she was sent to the garden. There, once she had finished crying, she met a real fairy, and Pamela's life began to change.******