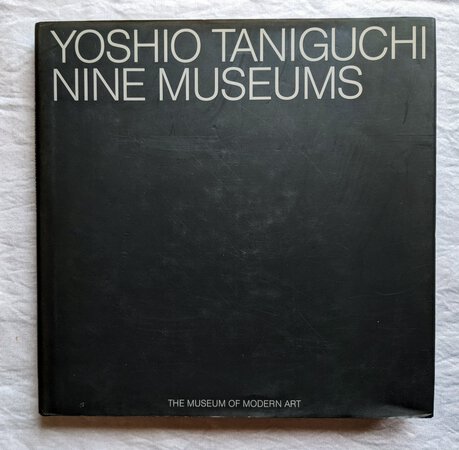 SIGNED & INSCRIBED ASSOCIATION COPY. SIGNED and WARMLY INSCRIBED by both the Author, TERENCE RILEY, and the Architect, YOSHIO TANIGUCHI, to DANIEL (Daniel Shapiro) & AGGIE (Agnes Gund) on the half-title page:

AGNES GUND, b.1938, is a renowned ARTS PATRON, MUSEUM OF MODERN ART PRESIDENT EMERITA, and PROGRESSIVE PHILANTHROPIST. Her second husband was Daniel Shapiro. Agnes Gund was a member of the selection committee that chose YOSHIO TANIGUCHI to be the architect to redesign the Museum of Modern Art, New York.

RARE and UNIQUE SIGNED & INSCRIBED copy with an ASSOCIATION to AGNES GUND and THE MUSEUM OF MODERN ART.

About TERENCE RILEY (from his NYT 2021 obituary):

******Terence Riley, Architectural Force in the Museum World, Dies at 66. He was instrumental in bringing to fruition two of the most important works of 21st century museum architecture.

As the chief curator of architecture and design at the Museum of Modern Art, Mr. Riley helped select and guide the Tokyo based architect Yoshio Taniguchi in the Museum's $858 million expansion, which was completed in 2004.******

About AGNES GUND (from Wikipedia):

******Gund joined MoMA's International Council in 1967; she then joined the Board of Trustees in 1976 and served as its President from 1991 until 2002. She serves on the boards of the Cleveland Museum of Art, the Foundation for Art and Preservation in Embassies, and the Morgan Library and Museum.

A civic leader and staunch supporter of education, women's issues and environmental concerns, among other causes, Gund is the former Chair of the Mayor's Cultural Affairs Advisory Commission of New York City, a former member of the New York State Council on the Arts, and has served on the boards of such wide ranging organizations as the Aaron Diamond AIDS Research Center, the Andy Warhol Foundation, the Barnes Foundation, Chess in the Schools, the Frick Collection, the Foundation for Contemporary Art, the Fund for Public Schools, the J. Paul Getty Trust, and the Robert Rauschenberg Foundation.

In 1997, Gund received the National Medal of Arts from President Bill Clinton, the highest award given to artists and arts patrons by the U.S. government. In 1998, Gund received the Golden Plate Award of the American Academy of Achievement. In 2011, Gund was nominated by President Barack Obama as a member of the Board of Trustees of the National Council on the Arts. In 2016, she was elected Honorary Fellow of the Royal Academy of Arts.******

In 2018 the New York Times wrote a long, glowing article about Agnes Gund titled: "Is Agnes Gund the Last Good Rich Person?" The article can be found online, well worth reading.

INTERNATIONAL BIDDERS PLEASE NOTE: This book will require additional shipping charges. After placing your order you will be notified of the charges and be able to accept or reject them before payment is taken. Thanks!