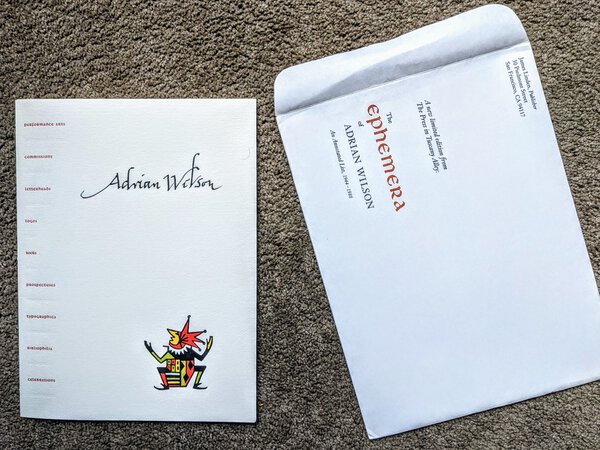 Folder / Paper Covers, 9x12 inches, string-bound with 8 pages plus 2 folded sample leaves (pages 129/130 and 107/108) laid into a flap on the inside rear cover. Comes with its original mailing envelope.

Illustrated with a frontispiece tipped-in photograph of the gate entrance to the Press In Tuscany Alley, plus some printed illustrations.

The Prospectus is in FINE condition. The mailing envelope is in GOOD condition with some corner and flap wear, and a couple small scrapes; the envelope has NOT been used for mailing.

About ADRIAN WILSON (from a 1988 NY Times Obituary):

******Adrian Wilson, a book designer and scholar who was considered one of America's leading fine printers, died Wednesday in San Francisco. He was 64 years old.

Working out of a small San Francisco studio known as '"The Press at Tuscany Valley," Mr. Wilson designed and printed scores of books. His many volumes, while little known to the general public, are famous among print connoisseurs, and many are collectors' items.

He is survived by his wife and by his daughter, Melissa Wilson Marshall, of San Francisco.******