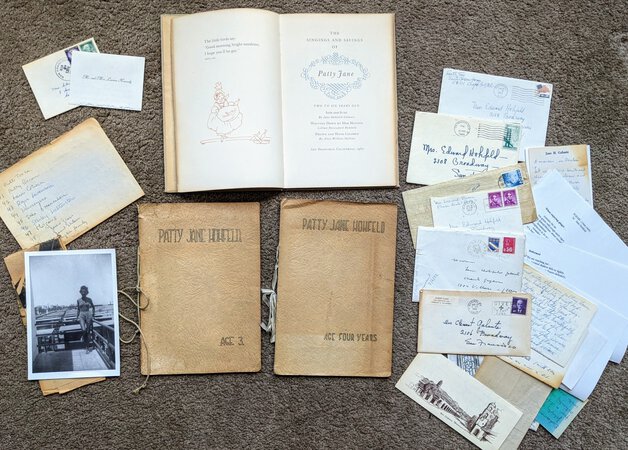 1960 ARCHIVE related to a Book PRINTED BY LAWTON KENNEDY, PRINTER for the HOHFELD FAMILY of SAN FRANCISCO with TWO HAND-DRAWN HAND-ILLUSTRATED BOOKS, Letters, and Ephemera

Archive Related to a Privately Published Book that was designed and printed by San Francisco Fine Printer Lawton Kennedy titled THE SINGINGS AND SAYINGS OF PATTY JANE - Two to Six Years Old.

The printing of the book was privately commissioned by the HOHFELD FAMILY, a prominent San Francisco family, and was published by the Hohfelds as a gift to be sent to family and friends. It consists of a collection of sayings, songs and poetry uttered by Jane Hohfeld Galante, as a child in San Francisco in the late 1920s and early 1930s, collected by her mother. Jane went on to become a leading Bay Area chamber musician and philanthropist. The book itself was printed by Lawton Kennedy in a very limited number and is quite scarce.

This small archive contains the book, letters and ephemera related to the book, and a pair of illustrated manuscript books upon which the printed book was based. Includes:

1) The Singings and Sayings of Patty Jane Two to Six Years Old. Said and Sung by Jane Hohfeld Galante, Written Down By Her Mother Lillian Devendorf Hohfeld. Drawn and Hand Colored by Alice Wilkins Neilson.

GOOD condition: Offsetting and a couple small damp stains to covers, fraying to cloth along edges.

2) Two HAND DRAWN and HAND COLORED manuscript books by Alice Wilkins Neilson, pairing sayings by a young Jane Hohfeld with original drawings. These appear to have been the manuscripts that formed the basis of Lawton Kennedy's published book.

GOOD condition: Small tears along spine, toning and creasing to wrappers. UNIQUE and QUITE LOVELY.

3) Eight handwritten letters addressed to Jane and her mother in the early 1960s, from friends who had received the book, congratulating the authors and praising the book. These Include:

A SIGNED handwritten note from Mr. and Mrs. LAWTON KENNEDY on their personal notecard, enclosing a small hand drawn music score which was published as a drawing in the book.

A SIGNED handwritten two page letter from CONRAD BECK, a Swiss composer. The letter is written in French.

A letter with a drawing from Ruth Tooze, an author; a letter from Mrs. Leonard Bacon, widow of the Pulitzer Prize winning poet from Rhode Island, and more.

The letters are in generally GOOD condition, some creases and bends, but all are clear, clean and fully legible

4) A handwritten list of 65 friends to whom the book was sent, on Jane Hohfeld's personal stationery

5) A photograph of Jane, several pages of poems, (some by Jane), a get well soon card, and two articles from a magazine on the work of Lawton Kennedy.

About LAWTON KENNEDY (from the Online of California website):

******Lawton Kennedy, b.1900 d.1980, developed an interest in printing at an early age. He started working full time as a teenager and soon became recognized as an exceptional pressman. He worked for several well known Bay Area printers including John Henry Nash, Johnck & Seeger, Jane Grabhorn's Colt Press and Albert Sperisen's Black Vine Press. For about seven years, he and Alfred operated Westgate Press in Oakland. In 1952, he moved to San Francisco and established Lawton Kennedy, Printer. Over the years, he printed many books and a wide variety of ephemeral material.******

You can read about Jane Hohfeld Galante at various places on the Internet, and about the composers Conrad Beck and Albert Elkus on Wikipedia.