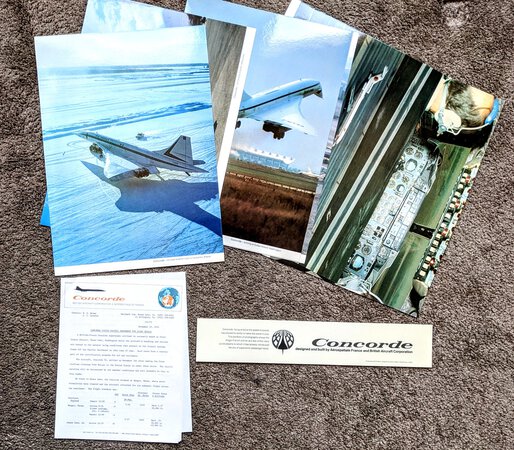 These text flight information sheets and publicity photographs are from circa 1975, BEFORE the Concorde's first flight with paying passengers. From Wikipedia: "On the morning of January 21, 1976, two Concordes, one each from British Airways and Air France, took off simultaneously on what would be the aircraft's first commercial supersonic flights with fare paying passengers."

The publicity information sheets consist of seven 8.5x11 inch sheets, single stapled together at the upper left corner, first page on Concorde letterhead, printed on one side only. The sheets are dated November 19,1974. The first page begins with "CONCORDE VISITS PACIFIC NORTHWEST FOR ICING TRIALS". The sheets also include information on areas of concern for both cities and airports: Sonic Boom, Airport Noise, Engine Emissions, etc. Clearly these are meant to promote the Concorde..

There is also a 3x16 inch advertising banner. The Banner states: "Produced and Printed in England by Davis, Gibson Advertising Limited". Arthur Gibson, of said firm, is considered one of the best aviation photographers of the 20th century. His firm was hired by British Aircraft to promote the Concorde.

Everything is in VERY GOOD condition, bright, clean, solid, unmarked.