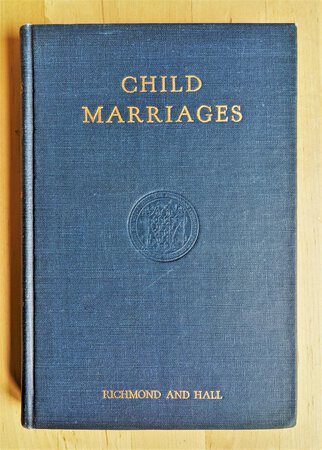 Published by Russell Sage Foundation, New York, 1925. First edition, with the date 1925 on both the title page and copyright page, with no indication of later printings.

Hardcover book, blue cloth covered boards with gilt titling on the front cover and spine, and a blind embossed emblem of the Russell Sage Foundation on both the front and rear covers, 5.5x8 inches, 159 pages including an Index at the rear.

About MARY ELLEN RICHMOND (from Wikipedia):

******Mary Ellen Richmond, b.1861 d.1928, was an American social work pioneer. She is regarded as the mother of professional social work along with Jane Addams. She founded social case work, the first method of social work and was herself a Caseworker.

Richmond was raised by her widowed maternal grandmother, Mehitable Harris, and two aunts. Her grandmother was an active women's suffragist who was well known for being a spiritualist and a radical. She grew up being constantly surrounded by discussions of suffrage, political and social beliefs, and spiritualism.

In 1900, she became general secretary of the Philadelphia Society of Organizing Charity. While there she advocated for legislation for compulsory education, against child labor, and for requiring support for spousal desertion. In addition, Mary believed the government should create a children's bureau and a juvenile court system. These were all radical ideas in her time.

In 1909 she helped establish networks of social workers and a method by which they did their work. This all started when she became the director of the Charity Organizational Department of the Russell Sage Foundation in New York City. While director, Mary E. Richmond worked to improve record keeping, improved training for caseworkers, and helped implement new social works programs. She believed a firm cooperation between social workers, educators and the health care system was crucial to successfully helping those in need. Her career took off from charity organization leadership in Baltimore and Philadelphia to an executive position with the prestigious Russell Sage Foundation in New York City.

Some of the more notable contributions of Mary Richmond were her fight for legislation to help deserted wives, the founding of the Pennsylvania Child Labor Committee, her work to establish a juvenile court, and the creation of a Housing Association.

A large part of her work was dedicated to research in the field of social work. She created methodologies on how to establish contact and conduct information gathering conversations. She is considered to be the first to have established social work as a profession.******